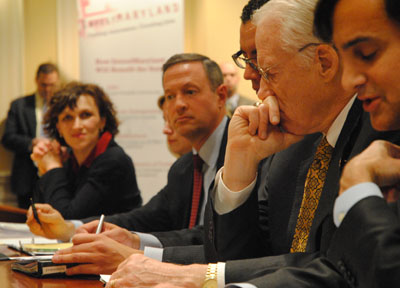 ANNAPOLIS - The House of Delegates gave the initial green light Thursday to a modified version of Gov. Martin O'Malley's plan to fuel innovation and high-tech jobs by pumping tens of millions of dollars into a fund aimed at promoting startups.

The House is expected to cast a final vote Friday on O'Malley's marquee economic proposal for the session. The plan, dubbed "Invest Maryland," would allow the state to auction tax credits to insurance companies over a five-year period to fund early-stage companies specializing in fields such as biotechnology, cybersecurity and life sciences.

The full House preliminarily approved a version of the proposal that was tweaked by a panel of lawmakers earlier this week. The House Ways and Means Committee trimmed the size of the venture capital program by 25 percent and also reduced the state's direct involvement.

O'Malley's proposal called for Maryland to auction $142 million in tax credits to generate $99.4 million for the fund between fiscal 2012 and 2014. Under the House version of the bill, the state would auction a total of $100 million in credits and is expected to yield up to $75 million for the venture fund.

"We have some really good businesses out there that are having a hard time getting access to capital," said Delegate Bill Frick, a Montgomery County Democrat who led Thursday's floor debate."This can really unlock the potential."

O'Malley has pitched the program to the General Assembly multiple times this session, making it a key point in his State of the State address and appearing before Senate and House committees in February to endorse the plan.

Still, the proposal languished in a House committee until this week when delegates decided to pare it down.

The House's version also reduces the direct role the state will play in the program by giving the Department of Business and Economic Development control over one-third of the plan's funds, down from half. The remaining two-thirds of the money will be invested on the state's behalf by private venture capital firms.

Profit generated by the state's direct investments would be pumped back into the program, while money generated from the private venture firms is slated to be returned to the state's general fund.

House Democrats rejected six Republican amendments, including one that would require the state to invest all its profit back into the venture program. Another Republican amendment would have diverted a portion of the program's funds to attract more high-tech businesses in rural parts of the state.

House Democrats accepted one GOP-sponsored amendment that would require the online publication of reports from companies that receive grants and tax credits under the program.

If the bill passes a final vote Friday, it will head to the Senate with only days left until the General Assembly adjourns Monday.

Senate leaders backing the program said Thursday that they are waiting for the House to pass its version before offering changes.

Sen. Richard Madaleno, a Montgomery Democrat and a member of the Senate Budget and Taxation Committee, said he's already exploring a few different options to fund the program, but declined to elaborate.

"I have a lot of questions about the tax credit approach," Madaleno said.