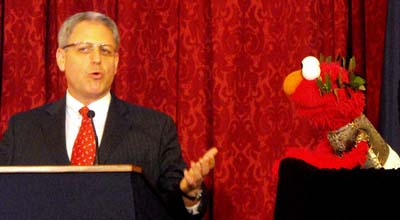 WASHINGTON - Elmo came to Washington Thursday, to the delight of more than two dozen first-grade students, to help introduce a new partnership between the National Children's Museum and Sesame Street designed to create an interactive learning experience for the region's youngsters.

"As Americans, we believe our children can achieve anything, but as a nation, we've never dedicated a special quest to that idea," said Kathy Southern, the museum's president and CEO. "This is especially true in our nation's capital, which has nearly seven museums and countless memorials, but none solely dedicated to our kids."

Southern said the new museum, which breaks ground at National Harbor in Prince George's County this year, will aim to fulfill this need.

The fuzzy, red Muppet joined Gary Knell, Sesame Workshop president and CEO, on stage, as the first graders beamed at the sound and sight of the popular character.

"You'll make a great tour guide," said Knell. "You and your Sesame Street friends are going to be a part of this new museum."

Knell said there are plans for an indoor river and also for a theatre where kids can explore their imaginations and even perform in shows. The new museum will also include a replica of the Oval Office.

"As you can see Elmo is incredibly excited about this new partnership and so are we," said Knell.

Knell said America is at a crossroads and the public education system is failing too many children -- a trend this partnership aims to end.

"From our view, it can be fixed by investing more in parenting time and in teaching time in early childhood experiences," he said. "These create a love of learning by allowing kids to use their natural curiosity to explore, to reach and to achieve."

Sen. Barbara Mikulski, D-Md., was unable to attend, but said in a statement that the museum will enhance the capital area's already excellent cultural opportunities.

"The capital region has the highest concentration of museums in the country," said Mikulski. "Beyond tourism, they highlight the significant events, artifacts and people that ground the cultural identity of our nation. So, it is fitting we have a museum dedicated to the empowerment of children."

Mikulski said she had happy memories of the former children's museum, which was located near Union Station.

Established in 1974 and then called the Capital Children's Museum, it saw nearly 200,000 visitors each year, according to the museum's Web site.

The museum remained at Union Station until 2004, when it closed because it was too costly renovate.

Moran, D-Va., praised the museum as being the only one solely dedicated to children.

"The exhibits are from their perspective," said Moran.

Moran remarked on the lack of funding for efforts like the NCM.

"It is dependent on the leadership of the U.S. Senate," said Moran. "And that leadership comes to a peak. Someone has to be ultimately responsible."

"The fact that he is here underscores what a priority this is," he said.

Cardin said, above else, the new venture invests in America's future.

"The museum is important because it is about children -- they are our future," said Cardin. "It's about excitement and imagination; it's about helping the creativity of young children, and that's what this is about -- making early childhood education fun. That's what this museum will do."