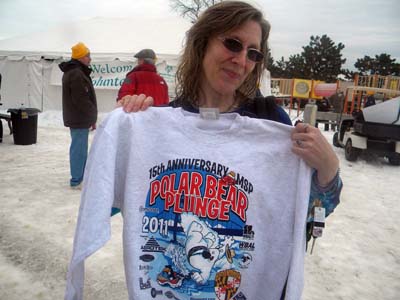 Thousands Plunge into the Bay to Raise Money for Special Olympics

ANNAPOLIS – Linda Gustafson emerged from the crowd, shivering and shaking but wearing a huge grin on her face. She was one of the brave ones.

“As you can tell, I go all the way in,” said Gustafson, of Bel Air, Md., pointing to her water-soaked hair.

This was Gustafson’s third year taking the Polar Bear Plunge into the Chesapeake Bay. She was one of an estimated 12,000 to dive into the frigid water Saturday for the 15th annual event, which raises money for Special Olympics Maryland.

In addition to raising money for the cause, Gustafson said she loves the invigorating feeling she gets from being in the water in the middle of winter.

“Oh boy, that water is so icy, it just sends a thrill through your body,” she said.

The water was icy, all right. According to the National Oceanic and Atmospheric Administration, the water temperature in the Chesapeake Bay was about 33 degrees Saturday – just two degrees higher than the day’s average air temperature of 31.

The plunge, at Sandy Point Beach, drew an estimated crowd of 25,000 participants and spectators, said Kelley Schneidwind, vice president of public relations for Special Olympics Maryland. It raised nearly $3 million in funds for the organization.

More than 100 companies and organizations were sponsors, including Aerotek, Constellation Energy Group and Comcast.

“I like the cause, for one thing … it’s a great cause,” said Gretchen Cook, of Baltimore, a loyal plunger who has participated in the event every year since 1997. “But the other thing is, I love cold weather. And so I can’t wait for this day every year. And I’m always hoping it’s snowing.”

Although it wasn’t snowing Saturday, there was snow on the ground from Wednesday evening’s storm.

There is no minimum age requirement to take part in the plunge, although people under the age of 18 must get written consent from an adult to participate.

Individual plunge participants are required to raise a minimum of $50, although greater amounts are encouraged in order to qualify for prize incentives, such as a plunge fleece for those who raise $500 or more.

The plunge was part of a daylong festival that included a costume contest and a vendor tent, with people selling everything from hot chocolate to offbeat T-shirts and apparel.

Bob Ogden, of Williamsburg, Pa., sells colorful Nepalese handmade hats for participants who need to warm up either before or after the event. Ogden has attended for the past six years, though he has yet to take the plunge himself.

He said because he is always working during the event, he has not had the chance to participate, but hopes to next year. “It’s just exciting, it’s an exciting crowd. Everybody’s upbeat, and the crazy hats are always a good seller here.”

Gov. Martin O’Malley was among those who plunged. “I think all of us derive a certain amount of inspiration from our Special Olympics athletes,” he said in a speech to the crowd. “It’s a great tradition here in Maryland.”

Plungers are required to wear some sort of shoes or other protective footwear when going into the water. Some wade in up to their ankles, while others, such as Gustafson, go all the way in.

“It’s very exhilarating,” Gustafson said, adding that she would definitely be participating again in 2012. “And it’s awesome. It’s crazy, and it’s fun.”