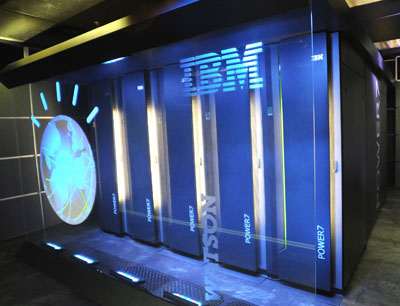 IBM, Nuance, the University of Maryland School of Medicine and the Columbia University Medical Center are teaming up to find ways to apply Watson's technology to medicine. (Photo courtesy of IBM)

Watson's Artificial Intelligence Being Directed Toward Medicine at UMD

COLLEGE PARK, Md. - The University of Maryland School of Medicine is helping to educate a new student: a computer that gained fame on the TV quiz show, “Jeopardy.”

Now, the University of Maryland medical school has joined IBM, the software developer Nuance and the Columbia University Medical School to apply Watson’s technology to medicine.

The university is suggesting medical literature for Watson to “learn” and is teaching it about unusual cases dealing with rare diseases or unexpected symptoms.

The hope, say those involved with the project, is that doctors could eventually use it in hospitals to assist with diagnoses or to answer verbal questions – elevating it beyond the more typical reference tool that computers have served as in the past.

The team has applied for a competitive grant for about $12 million from the National Institutes of Health that would help advance the research; it expects to hear about it in coming days.

The idea for the project came to Siegel about two years ago, he said. While visiting IBM in Hawthorne, N.Y., he saw the “Jeopardy” team working on the technology for Watson.  He immediately thought of the implications such technology could have on medicine.

“Doctors can only make decisions based on their experience,” Siegel said.  “Watson would have the equivalent of many doctors’ experience.”

Siegel said even the best doctors are lucky to keep up with 1 percent of journal articles in a given year; even specialists have too much literature in their fields to keep up with all of it.  Watson would be able to stay updated on journal articles, enabling doctors to have the latest research at their fingertips in real time.

Research on the project began about a year ago.  The University of Maryland’s role is to find the best way to bring Watson into the hospital to complement the work of current health professionals.  Nuance is involved in the voice recognition aspect of the project.

Although the precise role of a Dr. Watson commercial product has not yet been determined, there are endless possibilities, Siegel said.

It could have instant recall of tens of millions of electronic medical records.  It could evaluate drug interactions and discrepancies with medications and diagnoses or take patients’ medical histories. It could be present in emergency departments, using voice recognition to answer doctors’ urgent questions.

“It would be like a spell check,” Siegel said.  “And then it could synthesize and present electronic medical records in a clear and precise way.”

Dr. Nick van Terheyden, a Nuance spokesman, said Watson’s technology could determine the treatments that have been met with the most success. “It gives you a good handle on which cancers are best treated by specific treatments, for example,” he said.

Researchers have attempted to use artificial intelligence in medicine in the past, Siegel said. Limited knowledge, large amounts of time spent on training and setup, and oversimplifications have prevented past attempts from getting off the ground, he said.

An Internist program, for example, covered about three-quarters of diagnoses in internal medicine, but evolved into a reference system more than a diagnostic system about 10 years ago, he said.

Ideally, Watson would solve these problems by having access to more medical knowledge, accessing it almost instantaneously and having a deep enough understanding to recognize when symptoms are based in multiple diseases.

Researchers are “teaching” Dr. Watson with textbooks and journals normally used in medical school. The University of Maryland is working to provide access to de-identified medical records.

When new technologies are unveiled to the public, industry workers often become concerned that they will be replaced.  Medical employees don’t need to worry about losing their jobs to robots, Siegel said.

“The problem with medicine is not a problem of over supply, but a problem of under supply,” Siegel said.  “Watson would allow us to address the shortage of physicians and could actually provide new jobs and opportunities.”