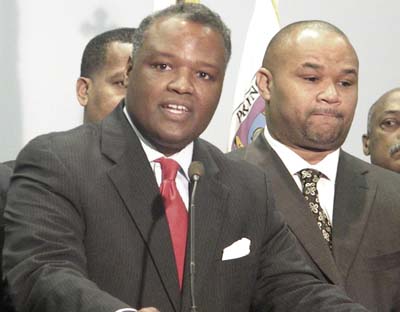 UPPER MARLBORO, Md. The incoming and outgoing county executives of Prince George's County each held brief press conferences Monday, one vowing to remain strong and finish the work he started, the other promising that criminal charges lodged the last few days in a federal probe would not compromise his agenda.

"My family and I are doing well," County Executive Jack B. Johnson said in a morning press conference Monday. "We have had hundreds of visitors and messages from people asking us to be strong and faithful."

Both men were reacting to the arrests Friday of Johnson and his wife, County Council member-elect Leslie Johnson, in a federal investigation of county officials' sweetheart deals with developers.

The Johnsons were charged with tampering with a witness and evidence and destruction of records. They were released Friday, pending a Dec. 13 preliminary hearing in U.S. District Court. Jack Johnson was put under electronic monitoring.

The FBI probe mushroomed Monday, with the arrests of nine people, including three Prince George's County Police officers, in cases involving drug trafficking, firearms and alcohol smuggling. Johnson Monday said he is working on next year's budget and a "blueprint" for Baker, who is scheduled to be sworn in Dec. 6.

Baker, acknowledging the allegations against Johnson, said his administration would remain focused on campaign promises  improving the school system, expanding the tax base and creating jobs.

Rod Rosenstein, the U.S. attorney for Maryland, said Friday after the Johnsons' arrest that more arrests in connection with the wide-ranging corruption probe would come.

Rosenstein said the arrests made Monday were part of a series of investigations relating to the investigation of Jack Johnson. One indictment Monday laid out the charges against seven people, two of them county police officers, in connection with a multi-million-dollar alcohol and tobacco smuggling operation.

Federal officials also arrested Melhi's wife, 49-year-old Ravinder Kaur Melhi, Amir Milijkovic, 39, who owns an auto glass shop in College Park, and two others  34-year-old Chun Chen of Bowie and 49-year-old Jose Moreno of Alexandria  in connection with the operation. Documents say federal agents moved to seize $3.5 million in cash in connection with the smuggling ring, in addition to 25 properties, 13 vehicles and funds from 84 accounts in four different banks. In a separate case, authorities charged a third county policeman, Officer Sinisa Simic, 25, at his home in Woodbridge, Va., on counts of conspiring to distribute cocaine and unlawful possession of firearms for drug trafficking. Authorities also charged another Woodbridge resident, 30-year-old Mirza Kujundzic, with the same offenses.