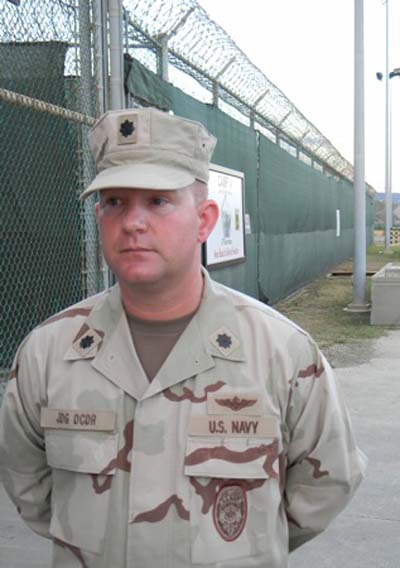 GUANTANAMO BAY, Cuba - The vast majority of the more than 170 detainees at Guantanamo Bay's prison camps, including a former Baltimore resident, have not been charged with any crime. Should they be charged and tried in a military commission, they face a judicial proceeding unlike any they would experience in an American court.

Baltimore detainee Majid Khan, a legal resident of the United States, has been imprisoned since 2003 as an enemy combatant, and it appears unlikely he will ever stand trial in Guantanamo.

Capital News Service was permitted to observe the trial of another detainee, Noor Uthman Mohammed, a terrorist trainer, in February.

Members of the media, observers, potential witnesses and victims' families were able to watch the case unfold in a gallery at the back of the courtroom, behind a hurricane-proof glass partition.

They can see the live action, but there is an unexplained delay on the audio of the closed-circuit feed of the proceedings.

Noor, as he requested to be called, was led into the commission room by eight young men, all guard force members with buzz cuts and camouflage fatigues. They walked from a vehicle down a gravel path lined with tall, tarp-covered, barbed-wire fencing to a side entrance to the court.

Inside, Noor faced a modern courtroom with high-tech gadgets like flat-screen monitors for each commission member. Military symbols proliferated -- walls were lined with the emblems and flags of the military branches.

Noor sat at the end of the long defense table, while guards lined the wall beside the door, watching his every move. The floor beneath the conference table had leg shackles for defendants, but Noor was not shackled. In military commissions, civilian counsel may be present for both the prosecution and defense -- their suit-and-tie ensembles contrasting sharply to the sea of uniforms.

This is what a detainee on trial at a Guantanamo Bay military commission sees. He does not see a jury of his peers, as he might in the U.S. Instead, he faces a panel of military officers. Noor's 15 commission members are seated in a jury box and identified only by number.

The judge -- today it's Navy Capt. Moira Modzelewski -- conducts voir dire, a questioning of the potential commission members to determine any biases, from her elevated platform in the front of the courtroom. She asks if they believe they can be impartial and fair.

Counsel has the opportunity to call each member back individually for questioning, mostly about their service. Did they have exposure to improvised explosive devices? Did they have relatives, co-workers or friends who were victims of 9/11?

As the defense points out potential biases, the prosecution hammers away at the impartiality. "Can you be fair and impartial?" Each member affirms in Noor's proceedings.

In Noor's case, all seven prosecutors who flew to Guantanamo were male. Only two were civilian.

After several challenges, the panel is whittled down to no fewer than five members. If the death penalty is an option, no fewer than 12 members serve.

If the defendant does not speak English, he dons headphones and listens to a translation provided by interpreters outside the courtroom. Their voices boom over the loudspeaker with the English translation of each response by the detainee.

During the trial, the judge gives the detainee a crash course in legal principles, providing cursory explanations of complex topics like jurisdiction and elements of a crime. For a detainee, the terms of his agreement could dictate his future.

Unlike a typical American court, the accused in this tribunal had no opportunity to directly confront witnesses, whose statements were submitted into the record. Under the Military Commissions Act, if the detainee pleads guilty, it does not stop the sentencing phase of the trial. The terms of that plea are not disclosed to the jury, the public or the media, so the trial continues to determine the detainee's fate should he fails to meet his obligations under the agreement.

Noor was sentenced to 14 years but will serve only 34 months under his plea agreement.

Majid Khan, the former Maryland resident, is challenging his detention through a habeus corpus claim in D.C. federal court.