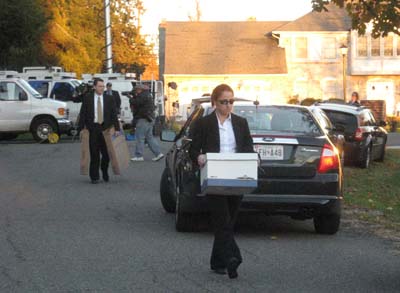 Each was charged with one count of tampering with a witness and evidence relating to the commission of a federal offense, and one count of destruction, alteration and falsification of records in a federal investigation, according to documents released Friday.

If convicted, each could be sentenced up to 20 years in prison and up to three years of supervised release and each could face fines of up to $250,000, said U.S. Magistrate Judge William Connelly.

Both Johnsons heard their charges this afternoon at an initial hearing at the U.S. District Courthouse in Greenbelt. They were then released on their own recognizance, although Jack Johnson will also be under electronic monitoring, said Connelly.

A preliminary hearing has been scheduled for both for Dec. 13.

The charges against the Johnsons were the result of a "long and complex" FBI investigation in Prince George's County, and the investigation is ongoing. "Additional charges are expected," said U.S. Attorney Rod Rosenstein.

The charges stem from alleged impropriety between Jack Johnson and a development company that was trying to secure funds from a Department of Housing and Urban Development program that provides money for the construction and acquisition of low-income housing.

Johnson was paid $5,000 on Nov. 5 and $15,000 on Nov. 12 - the morning of their arrest - by a developer who hoped to buy the executive’s influence in securing money through that program, prosecutors allege.

FBI agents searched Jack Johnson early Nov. 12 and seized the $15,000 he was allegedly given by the developer. They also made an image of his cell phone, which the FBI had been tapping since January, documents state.

Jack Johnson denied having any business with the developer and said the money was for a party to mark the end of his tenure as county executive, the documents state. Investigators allowed him to leave at that time.

Documents allege that later that morning, Leslie Johnson called her husband on his tapped cell phone to tell him that there were two women knocking on the door to their home; they turned out to be FBI agents. Jack Johnson ordered his wife not to answer the door and to go look in a drawer to find a $100,000 check written to him by a developer, documents state.

Phone taps revealed the county executive told his wife to find and destroy the $100,000 check. Jack Johnson told his wife to “tear it up,” and later to "flush that" down a toilet. Investigating agents tapping Jack Johnson's cell phone then heard the sound of a toilet flushing, documents state.

Attorney Roland Patterson, who is representing Leslie Johnson, said after the hearing that "Mrs. Johnson is asking for the prayers and support of all of her friends and family members as she goes through the ordeal of fighting to disprove the allegations that are pending now against her."

Attorney William Martin, representing Jack Johnson, left the courthouse before Maryland Newsline could get a statement from him.

The courthouse appearance capped a day in which federal officials served search warrants at the Johnsons' home and at the County Administration Building in Upper Marlboro. Investigators also searched the Johnson's home, their persons, a government-issued car and a storage area, prosecutors said at the hearing. 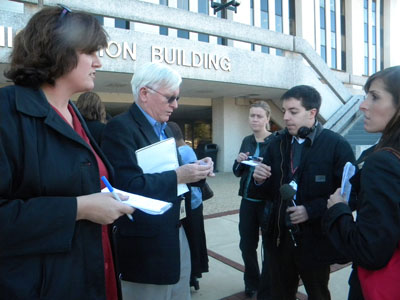 "County government is cooperating fully, but we are not aware of the nature of the investigation or any allegations," James P. Keary, communications director for the county, said early in the day.

Greg Findlay, who was working on a construction project down the street from the Johnsons' home, said he witnessed FBI officials enter the house on Brady Court Friday morning. He said the officers were in the home for several hours before they brought Johnson out in handcuffs, his wife with him.

Findlay said he also saw a plumber go into the home Friday.

Officials were carrying boxes of evidence out of the home this afternoon.

County Executive-elect Rushern Baker, whose swearing-in is scheduled for Dec. 6, declined to comment on the investigation, said spokesman Scott Peterson.

Leslie Johnson is a county council member-elect for District 6 in Prince George's County. She won the Democratic primary this fall with 40.6 percent of the vote in a six-person race, and had no Republican opposition in the General Election. She is scheduled to be sworn in Dec. 6.