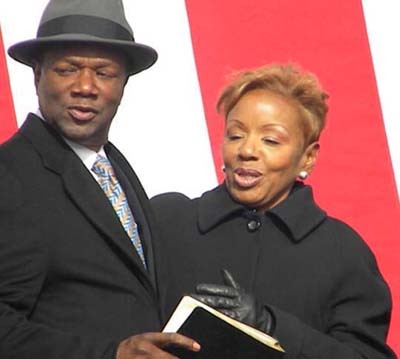 Former County Executive Pleads Not Guilty to Bribery and Extortion

GREENBELT, Md. – Former Prince George’s County Executive Jack B. Johnson pleaded not guilty Tuesday in U.S. District Court to all eight counts against him, as federal prosecutors announced additional evidence gleaned from wiretaps would be introduced later this week.

Assistant U.S. Attorneys A. David Copperthite, James A. Crowell IV and Sujit Raman said the bulk of discovery in the case would be completed by late next week.

Johnson, sitting beside attorney William R. Martin, entered his plea before Magistrate Judge William Connelly after hearing the charges against him, which included three counts of extortion, three counts of bribery and a count each of conspiracy and witness tampering.

Johnson, who first hesitated and then fumbled over his words before answering a question from Connelly about the year the former county executive was born, will be tried by a jury.

“I don’t even recognize the person being charged in these documents,” Johnson said outside the courthouse afterward. “We’re going to fight. My reputation is at stake, everything is at stake.”

Johnson, 61, also thanked the “many citizens” he said called him daily to “tell me they believe in me.”

New Carrollton’s Jacques Chevalier II, 55, is not one of those citizens. Chevalier thanked federal prosecutors as they left the courtroom “from the citizens of P.G. County.”

“I am sick of … politicians being corrupt,” Chevalier said.

Johnson, of Mitchellville, Md., was indicted on Valentine’s Day on eight counts, including bribery, after being ensnared in a countywide FBI corruption probe in November.

The 31-page indictment alleges Johnson committed extortion and accepted bribes totaling more than $200,000 from developers starting in 2003 until he was detained by the FBI on Nov. 12. In return, Johnson allegedly assisted two developers, not named but listed as co-conspirators, in obtaining land and county funding for projects.

Melhi was charged in November in a scheme to distribute untaxed alcohol and cigarettes.

Leslie Johnson won a seat on the council, but faces witness tampering and destruction of evidence charges in the probe. She had been scheduled for a preliminary hearing in U.S. District Court this week, but her attorneys requested a postponement until April 6.

Meanwhile, a Prince George’s County police officer arrested as part of the FBI investigation was indicted late Monday, along with an alleged co-conspirator.

Officer Sinisa Simic, 25, and Mirza Kunjundzic, 30, were indicted on new charges of conspiring to commit extortion. They had been indicted in October on drug and gun charges and remain detained.

The new indictment says that seven times between September and December 2009, Simic and Kunjundzic conspired to pay police officers to help transport untaxed cigarettes in Maryland and Virginia. The two also participated in the distribution of cocaine, the indictment said.

Prince George’s County Interim Police Chief Mark Magaw, who was named to that post by Johnson’s successor, County Executive Rushern L. Baker, threw his support behind investigators in a prepared statement released by the U.S. Attorney.

“Corrupt cops tarnish the badge that we all wear,” Magaw said. “I appreciate the work of the FBI, IRS, and U.S. Attorney’s Office in helping us root out corruption and maintain public confidence in our police force.”