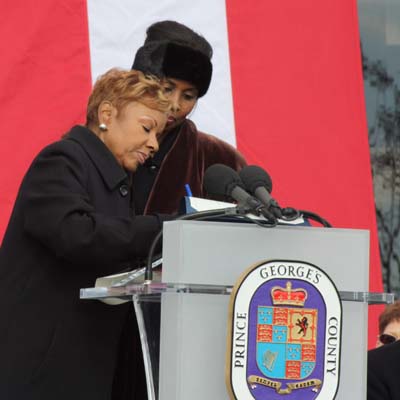 Leslie Johnson signs the official paperwork after taking the oath of office. Marilynn M. Bland, clerk of the Circuit Court, stands with her. (Photo by Maryland Newsline's Ilana Yergin) 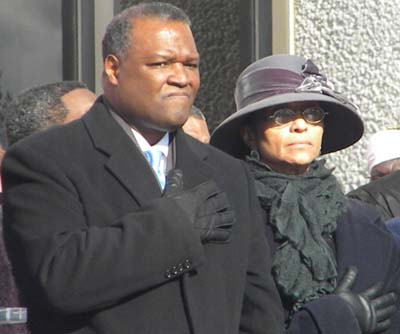 UPPER MARLBORO, Md. - -- Leslie E. Johnson was sworn in Monday morning as a Prince George’s County Council member, ending speculation that had circulated since her Nov. 12 arrest about whether or not she would take the oath of office.

“She’s entitled to take the seat, since she hasn’t been convicted of anything,” said Mykel Harris, chairman of the Prince George’s County Republican Central Committee. “But I am saddened to see that she moved forward.”

Johnson’s husband, County Executive Jack Johnson, also charged with evidence tampering and destruction of records in a federal corruption probe, stood at her side. Leslie Johnson was greeted with both cheers and jeers after she completed the oath.

She was one of nine council members - all Democrats - sworn in at the outdoor ceremony.

Soon after, Rushern L. Baker III was sworn in as county executive, ending Jack Johnson’s eight years in the county’s top elected post. Jack Johnson did not seek re-election due to term limits.

Baker gave a speech reiterating campaign promises to promote economic development in the county and improve education and public safety. And he stressed the importance of an “open, efficient and transparent government.”

While he applauded recent developments throughout the county, including the opening of National Harbor in Oxon Hill and a Wegmans supermarket in Largo, he promised to build upon those successes.

“Our philosophy will be not that you know somebody,” Baker said.

Initiatives will be based “on smart policies or what we like to call … smart growth. That is how we’re going to develop this county.”

Baker also promised to retain good teachers in Prince George’s County and “counsel” those who don’t make the grade to find new professions.

He promised to support public safety officials - but not those who act improperly.  “We know that you believe, just like we believe, that anyone who violates that sacred trust you want out of your ranks,” Baker said.

The GOP’s Harris was one of a number of local officials who said in the days leading up to the inauguration that Leslie Johnson would be handicapped in trying to do her job because of the federal charges pending against her. She did not make a public statement Monday.

Leslie Johnson was detained by the FBI at their family home in Mitchellville after her husband call her on his cell phone and told her to flush a $100,000 check from a developer down the toilet, court documents allege. She stuffed $79,600 in cash into her bra as FBI officials were knocking on their front door, documents say. Earlier in the day, Jack Johnson accepted a $15,000 payoff from a developer in exchange for his “official influence and authority,” court documents allege.

Jack Johnson has maintained his innocence since his arrest, and Leslie Johnson’s lawyer also said she is innocent. The two are expected back in court Dec. 13 for preliminary hearings.