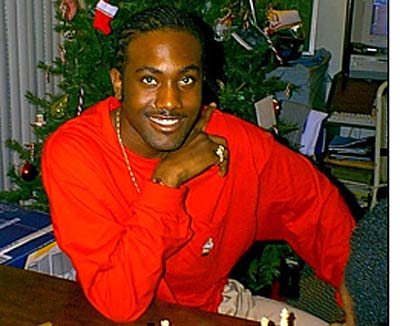 Jonathan Scott was 28 when he was shot to death in his car in the 2400 block of 57th Place in Cheverly in October 2006. Scott is one of more than 1,500 people killed in Prince George's County between 1980 and 2008 whose murderers have not been identified. (Photo courtesy of Gwen Scott)

WASHINGTON - When Jonathan Scott, 28, found out he had a 5-year-old son in Connecticut, he left his home in Prince George's County to meet him.

The two spent a week together and hit it off. Scott promised to make arrangements to come back and spend three months there as soon as possible.

Scott never made it back.

In October 2006, less than a week before he was to return to Connecticut, Scott was shot to death while sitting in his car outside a friend's house in Cheverly. No one in the residential neighborhood called police until the next morning, when a man walking his dog found Scott's body, still in the driver's seat.

Five years later Scott's killer has not been found, and his case is one of many still unsolved in the county.

According to data from the FBI's Supplemental Homicide Report compiled by the Scripps Howard News Service and analyzed by Capital News Service, there were 3,029 homicides in Prince George's County between 1980 and 2008. Police did not identify an offender in 1,517 of those cases, leaving what appears to be a mountainous caseload for the Prince George's County Police's four cold-case detectives.

Those 1,517 victims include Edmund Akofio-Sowah, 45, shot in his taxicab in Capitol Heights in January 2005, and Makeeya Antoinette Johnson, 18, found dead in a Chillum apartment that had been set on fire in November 2004.

Also among them is David Moncrieffe, 24 --shot in a crowded nightclub in Bladensburg in June 2004 by a man reportedly wearing a Philadelphia 76ers basketball jersey, after Moncrieffe accidently bumped into him. Moncrieffe was a college grad who worked with children with special needs and volunteered with the Boys and Girls Club. There were about 500 people in the club that night -- only one witness came forward.

John Maloney, chief of the homicide unit for the Prince George's County State's Attorney's Office from 2003 to 2007, said witness intimidation hindered investigations in the county when he worked there. Still, he was surprised that the county had solved only 49.9 percent of its homicides from 1980 to 2008, according to the data.

"Are you sure it's that low?" Maloney said.

Between 1980 and 2008, Baltimore City identified an offender in 53.8 percent of its 7,716 homicides. No other county in Maryland had more than 1,000 homicides, and no other county solved less than 71 percent.

According to the data analysis, the national average was 70.8 percent during that time span.

Prince George's County Interim Police Chief Mark Magaw said looking at data that went back that far does not paint an accurate picture of his current force.

"You and I both know you can twist numbers any way you want," Magaw said. "I'd put our homicide unit up with any in the country."

The data show a significant improvement in the county's homicide solution rate in recent years -- from a low of 31 percent in 2004 to nearly 60 percent in 2006, 2007 and 2008. Prince George's County Police spokesman Cpl. Evan Baxter said the department closed 79 percent of its homicides in 2009, and the department has made arrests in 14 of 35 homicides, or 40 percent, so far this year. Data from 2010 was not available.

Gary LaFree, director of the Department of Criminology and Criminal Justice at the University of Maryland, said that nationwide most homicides were committed by someone the victim knew, while counties with more homicides connected to random robberies, for example, faced a tougher task in finding suspects.

Maloney, who now works in the Montgomery County State's Attorney's Office, said the ratio of murders per detective is much lower in Montgomery County, which identified an offender in 76.7 percent of its 570 homicides from 1980 to 2008.

Maloney said years like 2005, in which the database lists 164 murders (102 of them unsolved) taxed Prince George's County's law enforcement resources.

"We had some crazy years," he said.

Those crazy years led to more than 1,500 homicides still unsolved at least three years after they occurred.

As those cases go cold, the trauma for the victims' families remains. For years, Gwen Scott's heart would jump when she glimpsed someone she thought was her son. Then she would realize it was not him -- that it would never be him.

She joined the Maryland Crime Victims' Resource Center and the support gave her solace. But it was also frustrating to find so many other families like hers.

"To hear that this type of thing is still going on and they have no witnesses, or no leads, it's really, really frustrating," Gwen Scott said. "A lot of cases go cold case because they're unsolved for so many years."

But specifics on how many cases had been assigned to the cold case unit were hard to find.

"There are a lot of factors that go into a case going 'cold,'" Baxter said via email. "They include the exhaustion of active leads, and the age of the case. Ultimately the homicide commanders come together to review the elements of each case individually and make the decision on a case-by-case basis."

LaFree said most homicides before 2009 would be cold at this point.

Several requests to speak with someone in the Prince George's County cold-case unit about its caseload received only emailed responses from department spokesmen.

"All homicides, regardless of age, are considered solvable," Baxter wrote.

"We utilize every resource available to close each homicide case," Capt. Mistinette Mints, commander of the public affairs division, wrote in an email she said was based on information from the homicide division. "Additionally, we utilize our federal partners on a daily basis. We are confident that the new laws on DNA will greatly assist us in closing cold cases. We are committed to bring closure to every homicide case."

But Gwen Scott said she hasn't seen much progress on her son's case lately.

Timothy Cordero was the detective originally assigned to it. Gwen Scott said after Cordero was promoted three years ago, he gave his files to his commander and she didn't hear anything for years. When she called to follow up on her son's case, the person she talked to couldn't find the file. Cordero was called and he came and found it.

In an email, the County Police's Public Affairs Office said Scott's murder was an active case assigned to Det. Sean Deere and the file was never lost. Gwen Scott said she heard from Deere for the first time last September, after Cordero located the file. She has not heard from him since.

"They have such a staff shortage; that's part of it too," she said. "But a lot of these cases don't get the recognition they should."

Cordero, who now works in Narcotics Enforcement, said he couldn't comment except to say that he still keeps in touch with Gwen Scott, passes on leads to the cold case unit and follows them up himself when he is in the neighborhood where Jonathan Scott was killed.

But so far there has been no justice for Scott -- or the now 10-year-old boy in Connecticut who barely got to know his father.

The Supplemental Homicide Report is part of the FBI's annual Uniform Crime Report and includes data on both the victims and offenders in homicides, as reported by the investigating agencies.

Capital News Service used the "Offender's Sex" field in the database, which lists the murderer as "Male," "Female" or "Unknown," to determine how many of the total homicides had been solved.

To account for data-entry errors, Capital News Service cross-checked the "Offender's Sex" field with the "Offender's Age" field, "Offender's Race" field and the "Situation" field that describes how many victims and how many offenders were involved in a given homicide.

"That means the crime hasn't been solved," Russo said. "The offender has not been caught."