WARMINSTER, Pa. – Justin DeSha-Overcash’s mother said a neighbor told her that her son’s truck was rarely parked outside his College Park home.

Karen DeSha wasn’t surprised to hear that; her son was determined, she said, and was busy trying to complete a double major in physics and astronomy at the University of Maryland. In a constant struggle to make enough money for tuition and rent, he worked three part-time jobs, including as a tutor and a teaching assistant.

“He had to grow up real quick,” said his father, Randy Overcash -- especially after Overcash was laid off by a company that had only recently promoted him to vice president, and the flagging economy cut into DeSha’s real estate commissions. Not that their son complained.

What DeSha-Overcash didn't figure on was a robbery attempt the morning of Jan. 11 at the 38th Avenue home he shared with roommates. Deandre Ricardo Williams, 23, of Washington, D.C., and Stephan Weaver, 22, of Bowie, Md., thought they would find money and drugs at the house, court records state. When DeSha-Overcash did not cooperate and moved toward Williams in an “aggressive manner,” Williams shot him twice, killing him, court records said.

Prince George’s County Police said they recovered a digital scale and drug packaging materials from the scene, along with enough marijuana in the home to suggest an intent to sell.

Williams and Weaver have been charged with first-degree murder and have confessed their involvement in the fatal shooting, police said.

Friends and family have said they don’t believe DeSha-Overcash, 22, was “some big drug dealer.”

William Wade, a high school friend, said in an interview he used marijuana with DeSha-Overcash on occasion, and both of his parents said their son had probably smoked pot.

"My son was sharing marijuana with his friends," Karen DeSha said. "That's not dealing. There's a difference."

His father said he was proud of his son's response to the two intruders.

“He pretty much died because he wasn’t going to let this person hurt or unfairly take” what wasn’t his, Overcash said. “He was going to protect his turf, and that’s something we’ll be proud of forever.”

“He was just happy,” DeSha said. “I used to tell people, ‘Oh, he’s a happy child.’ He turned into a happy adolescent and a happy adult.”

DeSha and Overcash remember their young son spending Saturdays doing math problems in their Salisbury, N.C., home, where they lived before moving to Pennsylvania in 2002.

The family lived downtown in an historic home, Overcash said. There weren’t many kids around, but their son made do.

“When he came home from his first day of kindergarten, he was upset they only concentrated on A, B. He thought they should have concentrated on all 26 letters,” DeSha said.

Even then, DeSha said her son had “a very old soul.” Overcash said that’s a trait his son never lost. 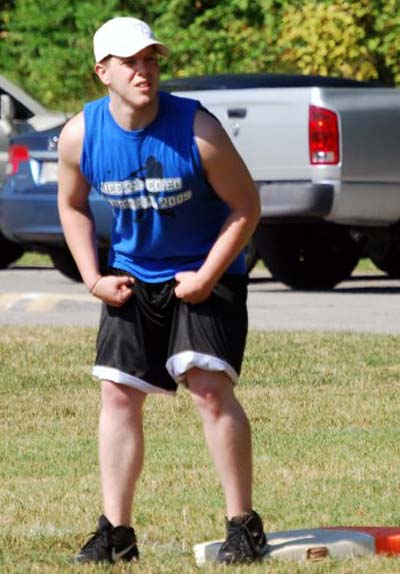 “He would worry about (us),” Overcash said. “Like a grandmother would.”

Charles Green, 22, was DeSha-Overcash’s friend since the third grade. He said even then, his friend was driven – if a little hard-headed.

“We would get into some kind of argument, and I knew I would be right, but he would keep on going on with what he was saying until one of us gave up,” Green said. “Which was usually me.”

At age 6, DeSha-Overcash told his mother he wanted to be a physicist, understanding little about the job except that it involved math. DeSha said she expected her son to change his mind as he grew up.

“But he never swayed,” she said.

DeSha-Overcash would have graduated from the University of Maryland in May.

In 2002, the family moved to Bucks County, Pa., after Randy Overcash was promoted within his company. The move didn’t sit well with his son, at first.

“He was very shy when we moved to Pennsylvania,” DeSha said. “He had been with the same children since first grade.”

Some this year would become his pallbearers.

It took some time, but DeSha-Overcash learned to fit in at his new home in suburban Philadelphia.

The first time Wade met DeSha-Overcash, the two were in the 10th grade.

Wade said he knew DeSha-Overcash was on the football team, but they hadn’t talked until the two happened to sit next to each other in the lunch room at school one day.

“We were both really good at shooting Gatorade caps off our fingers,” Wade said. “We used to snipe people from across the lunch room.”

From there, a friendship blossomed. By the 12th grade, Wade said he and DeSha-Overcash were best friends. The two remained close even as they attended college at separate schools; Wade at St. Joseph’s in Philadelphia, DeSha-Overcash at the University of Maryland.

The two saw each other often, Wade said – and, yes, they sometimes smoked marijuana, he said.

What Wade prefers to remember most, though, is his friend’s dependability.

“When we were in college, he would drive me down to school with all my stuff; he had this big black truck. He wouldn’t even think twice about it,” Wade said.

“I started going out with this girl in Pittsburgh. He was picking me up and dropping me off at the airport. He did a lot of driving, not just on my behalf; he was really good about staying in touch (with everyone). It was important to him.”

Kara Sarvey was DeSha-Overcash’s girlfriend in high school and through part of college. The two stayed close even after they stopped dating, she said. Sarvey remembered him as dedicated and intelligent.

“He was determined on the football field, on and off the field with school and everything,” she said. “He was very, very smart. One of those naturally smart people, where they really didn’t have to study too much.”

Sarvey said the two would travel to North Carolina in the summertime, where DeSha-Overcash had still had many friends. The two would spend time with those friends, and then hit up DeSha-Overcash’s favorite restaurants from his home state.

“We would come back 10 pounds heavier,” she said, “because all we’d do is eat down there.”

DeSha-Overcash never forgot his North Carolina roots, which is one reason why the lifelong Tar Heels basketball fan was devastated when he was turned down by the University of North Carolina’s admissions office. 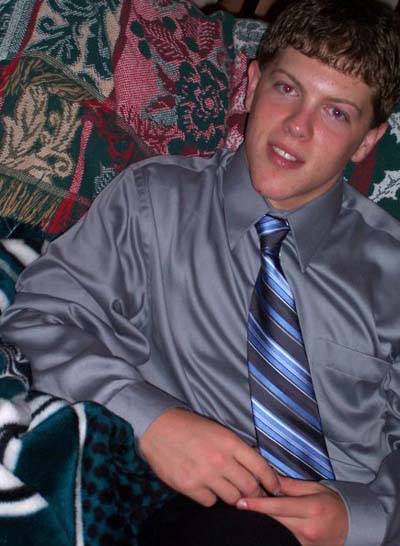 But he told his father he was happy he ended up in College Park.

He would say, "I’m so glad I ended up here for the education I’m going to get, ” Overcash recalled.

Outside of basketball, DeSha-Overcash embraced being a Terp. He quarterbacked his intramural flag football team and made a point of getting to know each of his professors in the physics and astronomy departments, his parents and professors said.

His mother said her son had to make sure he knew his professors “so he’d know what they expected of him.”

When he wasn’t in classes, he was working as a tutor in physics, math and astronomy, as a teaching assistant in the Physics Department and as a student staff member at the observatory.

Both parents said they talked with and visited their son often. His mother remembered spending a full day on campus shooting video for a candy bar commercial competition. The premise of the commercial was DeSha daydreaming about Butterfingers. Her son would shower her with candy bars, and then steal one from her before she would tackle him to get the candy back.

“He let me tackle him all over the University of Maryland,” DeSha said. “We had the best day. …

“Life with him was fun, it really was. He was a hoot.”

‘Not a Drug Deal Gone Bad’

When Prince George’s County Police announced the homicide – the 12th in the county this year – the release sent by the public affairs office referenced finding marijuana and drug packaging materials in the home DeSha-Overcash shared with roommates.

According to charging documents, Williams confronted DeSha-Overcash at gunpoint, and demanded money and drugs. When DeSha-Overcash did not comply and moved toward Williams in an “aggressive manner,” Williams shot him twice, court documents state.

DeSha-Overcash struck Williams with a glass jar during the confrontation, police said, leaving a scar still visible aside Williams’ left eye in a mug shot released by police.

Regardless of whether DeSha-Overcash sold marijuana – and police have repeatedly declined to directly comment, instead pointing to the charging documents – his mother is unwilling to let her son be remembered as a drug dealer.

“This is my son. No, he wasn’t perfect, because no one is. But they’re not going to define my son after all the beautiful things he did.”

Overcash said he didn’t think police would just “make up” details about the drugs taken from the house. He also said he did not know any of DeSha-Overcash’s roommates particularly well.

Attempts to contact the roommates at the College Park house they shared were unsuccessful.

His son, Overcash said, “was not some huge drug dealer. There’s no question, I think, in anybody’s mind.”

“To me, this was not a drug deal gone bad, or anything. This was purely a robbery that targeted Justin.”

His father added, “And I don’t really know, cause and effect-wise, why it matters.”

Coping with the Loss

Overcash said with his son’s murder, he has lost a part of himself. 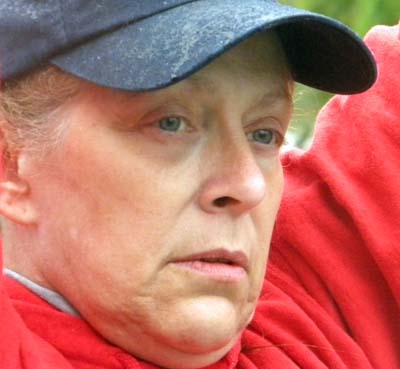 In Doylestown, Pa., the restaurant where Sarvey works as a waitress is hosting an event on DeSha-Overcash’s birthday May 1, to raise money for the Justin DeSha-Overcash Summer Research Award -- a fund set up by the Astronomy and Physics departments at the University of Maryland for out-of-state students.

The first award will be presented next summer.

Elizabeth Warner, a faculty research assistant and observatory coordinator with the Astronomy Department, said DeSha-Overcash was constantly struggling to make the money necessary to pay out-of-state tuition, which is more than $11,000 a semester, according to the university website.

Warner said she doesn’t believe DeSha-Overcash was selling drugs, but hoped providing money through the research award would discourage out-of-state students from going outside the law to make ends meet.

“We decided there are students (like DeSha-Overcash) in similar situations working their butts off,” Warner said. “We certainly don’t want to see them taking a shortcut type of route.”

His mother has taken to driving from North Carolina once a month to demonstrate on Barlowe Road in Palmer Park, Md., near Prince George’s police headquarters. She said she wants to spur county residents to take action against violence.

It’s become her mission now that her son is gone, but she said she doesn’t demonstrate out of anger.

“I have already forgiven these young men,” she said of Williams and Weaver. “My son would have forgiven them, and I have to honor my son. He never held a grudge against anyone.

“And, really, I feel so sorry for the parents of these young men, because so many lives were lost that day. Maybe not physically or literally, but a lot of lives were destroyed. …