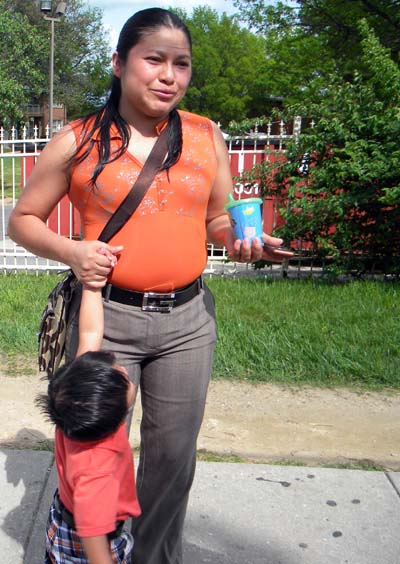 Thirty of the 35 homicides committed Jan. 1 through April 29 in Prince George's County were committed inside the Capital Beltway. View the county homicide locations in a larger map. (Compiled by Maryland Newsline's Alexander Pyles)

Interactive graphic: Who are the murder victims?

LANGLEY PARK, Md. – Jorge Sactic said when he leaves his bakery at a shopping center on University Boulevard, he hurries to get into his car.

He does not linger outside La Union mall after dark. He does not make stops on his way home. Once there, he does not dare walk down the sidewalk to a friend’s house. Langley Park is too dangerous, he said.

“It scares me,” Sactic said. “I wish I can walk, you know, to places, to go to visit a friend or relatives, and I cannot do that.”

Sactic, like others in Langley Park, is feeling the sting of Prince George's County's mounting homicide count. In a grisly week-and-a-half in January, the county suffered 13 homicides in 11 days. Two of those 13 were in Langley Park.

The county’s homicide total had climbed to 35 by April 29—with a third murder in Langley Park--trailing only Baltimore City’s 67 in Maryland in sheer numbers. Prince George's had the third highest homicide rate per capita for the four months, trailing Baltimore City and Queen Anne's County. (See table at right.)

In contrast, neighboring Montgomery County, with a population larger than Prince George’s, had logged six murders this year. (See comparison of homicide totals in surrounding areas.)

Twenty-five people had been killed in Prince George’s County at about this point last year, police statistics show.

Many of the victims in Prince George’s fit into patterns: All but two of the 35 victims were men; 28 of the 35 were African-American.

The locations of the slayings, too, had some predictability: Thirty of the 35 occurred inside the Capital Beltway. A number were concentrated near Bladensburg and the southeast corner of the beltway, between Suitland and Hillcrest Heights - and in and around Langley Park.

“You need to look out for yourself in Langley Park,” said Romel Rodriguez, 24, in Spanish.

The plumber, who has a 5-year-old son, Alex Rodriguez, and a 2-year-old daughter, Alison Rodriguez, said he does not feel safe in his community, where he has lived for a year. He is originally from Guatemala.

When he gets home at night from his job in Virginia, he goes right inside.

He is not alone in his fears.

Zoila Martinez, 30, said she wants to leave Langley Park. She has lived there for five years, and said she feels unsafe when she runs errands near her house.

She works at a laundromat and said she wants to move to a more quiet and safe area with her 2-year-old son, Jonathan Abraham Martinez.

She tries not to go out at night, she said, in an interview translated from Spanish.

“There’s a lot of violence.”

The Challenges in Langley Park

In Langley Park, crime is especially difficult to control because some residents are hesitant to cooperate with police because of their immigration status, said Enid Gonzalez Aleman, senior manager for Casa De Maryland’s legal program.

Other problem areas in the county do not have the concentration of immigrants that Langley Park does, U.S. Census data reveal.

County Police Capt. Michael Straughan, commander of criminal investigations, declined to identify any factors that increase the likelihood that homicides would occur in those areas, except to say a poor economy, in general, increases crime.

Aleman said the citizenship status of the residents of Langley Park plays a role in police investigations.

"Many families have a member who is undocumented,” said Aleman, referring to a person’s immigration status. “People are very afraid to get involved with the police.”

Langley Park’s population is more than 76 percent Hispanic or Latino, according to the most recent U.S. Census. Data from 2000 showed that more than 52 percent of its residents were not U.S. citizens.

Maj. Hector Velez, the police commander for District I, agreed there are special circumstances that make Langley Park challenging for law enforcement, including what he described as unfounded concerns from some immigrants that police might have a role in enforcing immigration standards.

But people do not feel they can go to police in a time of need, Aleman said, partly because of a partnership created by the U.S. Immigration and Customs Enforcement with local officials.

Through the program, the fingerprints of everyone arrested and booked are checked by the county Department of Corrections against immigration records. The Department of Homeland Security said the mission of the program is to deport violent criminals, but some, like Aleman, say immigrants who have committed minor crimes, or none at all, have been deported.

Prince George’s County was the first county in Maryland to join the program in December.

Some in the community “don’t see the police as a defender,” Aleman said. “When they see … that an individual calls the police and that individual becomes the target of the police, then that destroys the trust.”

Velez said the violent situation in Langley Park is hardly unique. “Violent crime is an issue we have to deal with, not only in District I, not only in Prince George’s County, but nationwide,” he said.

Tackling spikes in the homicide rate can be difficult, because they are hard to explain and can occur unpredictably, Straughan said.

George LaFree, director of the Department of Criminology and Criminal Justice at the University of Maryland, said a large influx of immigrants can sometimes create an increase in homicide rates, partly due to income inequality and poverty.

“In any urban setting where you have an accumulation of people who are poor, and thus vulnerable, you have a greater likelihood of crime,” Aleman said. “In this situation you just add the immigration element to that, and it increases the level of danger in the community.”

Straughan said no matter where, or why, a homicide occurs, police have the same job.

“We try to close every case. Race has no bearing on our job.”

Straughan said recent numbers show there is room for optimism. He noted that countywide, the homicide rate, by month, has improved over 2010 levels since January’s sharp uptick.

There were two fewer homicides this March (seven) than in March 2010 (nine), Straughan said.

Arrests have been made in six of the January murders, including the two in Langley Park, police said.

Overall, police have closed 14 of 35 criminal homicide cases in the county this year after a sudden spike created a “a taxing load” for the department, Straughan said.

Additional hands have helped. Five detectives and two sergeants were added to the homicide unit since January, bringing the unit’s size to 27 detectives in five separate squads, Straughan said.

The department also has a cold case unit that includes four detectives and a sergeant, he said.

Sactic is not satisfied with the violence around him, but sounded defeated when asked what could be done to curb crime.

“There is nothing no one can do about it right now, unless they take serious measurements to work with the people,” he said.