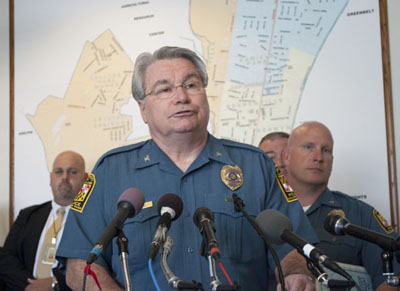 
Mitchell says the Thirsty Turtle must comply with local and state liquor laws.

COLLEGE PARK, Md. – University of Maryland Police Chief David Mitchell railed against the Thirsty Turtle during a press conference late Tuesday, calling it a “bad neighbor” in the wake of a quadruple-stabbing that followed a fight at the College Park bar.

Four men, three of them University of Maryland students, were stabbed across the street from the Thirsty Turtle early Tuesday morning. Shortly before the stabbing, the victims and a suspect were thrown out of the bar after an altercation, police said.

The three University of Maryland students are all under the legal drinking age, Mitchell said. He said the bar has been fined in the past for serving underage patrons.

“I’ve received complaints from parents and administrators about the lack of good common sense in admitting underage students,” Mitchell said.

He added the three university students, one 19 years old and two 20, were all allowed to enter the Thirsty Turtle after showing their own legitimate Maryland identification, which made clear they were not of legal drinking age.

John McGroarty, a liquor inspector for Prince George’s County, said the bar, in the 7400 block of Baltimore Avenue, had been cited three times in the past two years for various violations, including admitting and serving underage patrons.

One of the incidents took place Sept. 23.

“We’re not here to adversely affect business; we’re here for the safety of students,” McGroarty said.

Mitchell added that in a recent three-week period, a “significant number” of underage students who had been injured and treated in incidents related to alcohol consumption identified the Thirsty Turtle as the place that served them.

The liquor board has the authority to shut the bar down without a hearing if there is an “imminent danger” to patrons or the community, McGroarty said. He said the board would not move to shut the Thirsty Turtle down immediately, but Mitchell said he is ready to take decisive action if warranted.

“I’m ready to padlock it tonight, but it's not my call,” Mitchell said.

Management from the Thirsty Turtle declined to comment after several attempts by Maryland Newsline to contact them.

University of Maryland Police Chief David Mitchell and others respond to the stabbing incident. (Video by CNS-TV's Tori Blake)

Prince George’s County Deputy Police Chief Kevin Davis said police are actively searching for a Hispanic male with a black mohawk as the main suspect in the stabbing. He was inside the bar with the four victims, police said, and was thrown out with them.

Police were notified of the stabbing at about 1:30 a.m., and the victims were found near the Cornerstone Grill and Loft, about a half block south of the Thirsty Turtle.

Three of the four victims were treated and released from area hospitals. A fourth was expected to be released soon, Davis said.

Catherine Yang, 31, store manager of Ten Ren Tea Time, said she wasn’t surprised by the news. “I always had the feeling that maybe something really bad gonna happen next door,” she said. “It’s a bar; what are you expecting?”

Yang said she has been working at the tea house adjacent to the Thirsty Turtle for more than three years.

Yang said Tea Time’s store windows were broken three times last year because of drunk people on the streets. “I’m not saying it must be their customers, but it’s easy people could get drunk over there and do whatever on the streets,” she said.