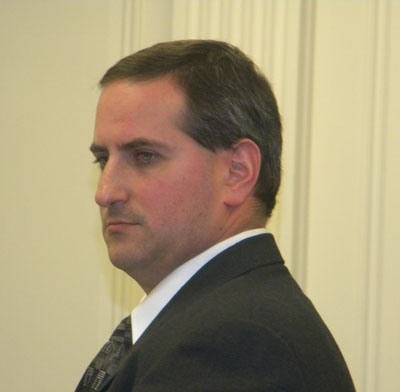 Thirsty Turtle owner Alan Wanuck says he has taken a number of proactive steps to ensure underage drinkers are not admitted to his College Park bar. (Photo by Maryland Newslines Justin Karp)

Liquor can be sold at the bar until a Nov. 23 fact-finding hearing, when the board will determine an official cause for the revocation.

Last night’s vote came after the board found the embattled bar and owner Alan Wanuck guilty of selling alcohol to a minor for the second time in two years.

“A revocation is certainly appropriate,” said Franklin Jackson, chairman of the county Board of License Commissioners. “There is a whole lot of evidence of underage people under the impression that they can get into the Thirsty Turtle.”

Problems at the Thirsty Turtle were underscored last month, when four men – three of them under the legal drinking age – were stabbed following an altercation inside the Thirsty Turtle. A hearing on that incident is scheduled for next Wednesday night.

University of Maryland Police Chief David Mitchell, who has railed against the Thirsty Turtle and repeatedly called the bar a “bad neighbor,” said he was relieved at the board’s decision.

“They obviously have taken the testimony that they’ve heard this evening and rendered what I believe to be an appropriate decision,” Mitchell said.

A parade of law enforcement officers spoke against the Thirsty Turtle in reference to a Sept. 23 integrity test, which led to the board’s hearing. On that night, the liquor board, in conjunction with University of Maryland Police, attempted to send two underage police aides, Eric Hamrick and Andrew Ross, into each of the three downtown College Park bars.

The aides, both 20 at the time, displayed their Maryland driver’s licenses, which showed they were not of legal drinking age. They were denied entry to Cornerstone Grill & Loft and R.J. Bentley’s, but granted admission to the Thirsty Turtle and served two Bud Light beers.

“There was very little hesitation on the doorman’s part when I provided my ID,” Ross said.

The doorman that night, Jordan Reid, testified that it was the first mistake he has made in four years of working security at various bars in the Washington area.

“The fact that their identification was vertical was a giveaway that they were underage,” Reid said. “I was disgusted with myself.”

In Maryland, drivers under 21 are issued a vertical license. Upon turning 21, they are issued a horizontal identification card.

Documents presented to the board showed that both Hamrick and Ross presented vertical ID cards to Reid at the door.

Wanuck testified that when officers and county liquor inspector John McGroarty confronted him shortly after the aides were let into his bar, his immediate thought was that Ross and Hamrick used fake identification.


The Prince George's County Liquor Board unanimously voted to revoke Thirsty Turtle's license at a hearing for an underage drinking incident that happened on Sept. 23rd. (Video By CNS TV's Tori Blake)

“I was shocked,” Wanuck said. “I thought there was no possible way that it had happened.”

Wanuck and his lawyer, Linda Carter, attempted to portray the incident as isolated. They said Reid was terminated immediately that night.

“We don’t want there to be any problems emanating from our establishment,” Carter said. “It’s not good for us, and not good for College Park.

“Alan and his staff have worked very hard to make sure that this doesn’t happen. For some reason, that night, it happened,” she said.

But Board of Licenses Commissioner Armando Camacho, along with the other three members of the board, admonished Reid and the bar repeatedly throughout the hearing.

“You failed miserably,” Camacho said. “We can’t be there every day, but knowing what we’ve seen, I cannot see how we can say this is an isolated incident.”

Carter asked the board for leniency based on a laundry list of proactive steps the bar has taken since the compliance test, including purchasing an ID scanner, conducting random identification checks inside the bar and requiring that every Thirsty Turtle employee be certified in alcohol compliance.

The bar entered as examples of its diligence nearly 200 identification cards – some fake, some expired, some altered and some real ones presented by people who didn't own them – that Wanuck said he confiscated.

But both Jackson and Commissioner David Son told Wanuck his testimony too closely resembled similar statements he made last summer. The Liquor Control Board fined the bar’s owner $5,000 in August 2009 for selling alcohol to a minor. A year earlier, in November 2008, the board fined the bar $3,000 for refilling expensive liquor bottles with cheaper alcohol.

“Every plan sounds solid, but you keep coming back,” Son said. “Apparently, they’re not working. You said the same thing in 2009. It hasn’t happened.”

Carter said in a telephone conversation that despite Wednesday's ruling, the "fight is not over."

"We are analyzing all of our options," Carter said, "but we are not disclosing our strategy."