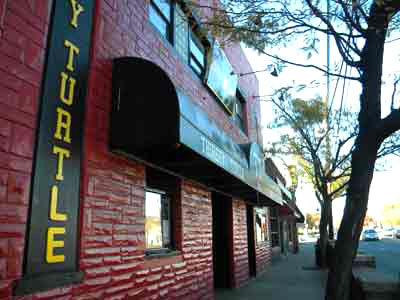 The Thirsty Turtle, which opened its doors to students in downtown College Park three years ago, is no longer licensed to serve alcohol. (Photo by Maryland Newslines Justin Karp)

HYATTSVILLE, Md. - The owner of the Thirsty Turtle voluntarily surrendered its liquor license Wednesday, officials said, on the same day the trial date was set for a man accused of stabbing four people after an October fight at the College Park bar.

A Prince George's County Liquor Control Board spokeswoman confirmed that the bar turned in its license around noon on Wednesday, meaning it is no longer allowed to sell alcohol.

"The Turtle had the reputation of many incidents of underage drinking going on," Leonard said.

The county Board of License Commissioners voted unanimously Nov. 3 to revoke the bar's liquor license after it was found guilty of serving alcohol to minors for the second time in two years. "They obviously have taken the testimony that they've heard and rendered what I believe to be an appropriate decision," University of Maryland Police Chief David Mitchell said following that vote.

The board was set to officially revoke the license after a Nov. 23 fact-finding hearing. But liquor board officials said Wednesday that hearing is no longer scheduled.

Linda Carter, the lawyer representing Thirsty Turtle owner Alan Wanuck, said at a hearing last night on the stabbing incident that Wanuck would not pursue an appeal. "He doesn't want to do anything that would be detrimental to his neighborhood," Carter said. "In the end, the Thirsty Turtle was too big to run by himself."

Wanuck was not available for comment, nor did he appear at Wednesday's hearing.

Meanwhile, Leonardo Alonso Ramos, 21, of Kensington, accused of stabbing his brother and three University of Maryland students after a fight on Oct. 12 at the Thirsty Turtle, will face a judge in Hyattsville Dec. 10.

Ramos and his brother, Jose Ramos, were involved in a fight with three Maryland students, Eric Gaul, Amir Itani and Michael Stevens, inside the Thirsty Turtle on Oct. 12. The three Maryland students were all under the legal drinking age. After being ejected, the brawl spilled onto Knox Road, where police allege Leonardo Ramos drew a knife and cut his brother and the three students.

But a representative of the Prince George's County State's Attorney's Office said video evidence from inside the Thirsty Turtle will only give prosecutors enough evidence to pursue one count of 2nd-degree assault.

Video evidence and eyewitness accounts outside the bar corroborate Ramos' claim that he was acting in self-defense when he pulled out a folding knife, said Ramon Korionoff, communications director for the county State's Attorney's Office.

"Video shows multiple individuals beating on him," Korionoff said. "It looks as if he used the pocket knife to defend himself and escape."

Surveillance tape from inside the bar, officials said, does show that Ramos punched one of the victims in the face, allegedly in a fight over a barstool.

If convicted of a 2nd-degree assault charge, Ramos faces up to three years in jail, Korionoff said.

The surrender of the Thirsty Turtle's liquor license comes after a string of incidents at the College Park bar since it received permission to sell alcohol in 2007.

Three violations of county liquor laws by the bar are on the books in Prince George's County. The latest one, in which the bar served beer to two underage University of Maryland police aides on Sept. 23, led to the board's unanimous vote to revoke its liquor license Nov. 3.

But last month's stabbing brought the Thirsty Turtle and underage drinking in College Park back to the forefront, with Mitchell repeatedly admonishing the bar as a bad neighbor to the school.

"This is not a good place to hang out," Mitchell said Oct. 13, a day after the stabbing. "What makes the Thirsty Turtle worse than any other bar in the area is the demonstrated failure to properly card students and other underage drinkers."