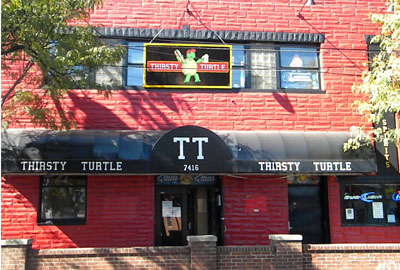 The Thirsty Turtle in College Park has a history of liquor code violations dating back to 2008. (Photo by Maryland Newslines Tami Le)

COLLEGE PARK, Md. - The Thirsty Turtle has been slapped with $8,000 in fines for liquor code violations in the last three years and is facing additional citations for serving alcohol to minors, following Tuesday’s stabbing of four young men in College Park.

A review of Prince George’s County Liquor Control Board documents confirmed that the Baltimore Avenue restaurant and bar has outstripped three other establishments operating in the downtown College Park area in liquor code citations.

Since receiving its liquor license in November 2007, the Thirsty Turtle has been fined twice for violations of county codes. Two other cases are pending against it.

“If it’s found there’s an imminent danger, they could be shut down,” said John McGroarty, a liquor inspector with Prince George’s County, at a news conference this week.

Only one other bar in the downtown College Park area, the Santa Fe Café, had received a citation from the county since 1996, Maryland Newsline’s record review revealed. Santa Fe was hit with a $5,000 fine for serving alcohol to minors in May 2009. The Knox Road bar closed in May.

Cornerstone Grill and Loft and R.J. Bentley’s restaurant, both operating in downtown College Park near the University of Maryland campus, had no liquor code violations since 1996, a documents search showed.

University of Maryland Police Chief David Mitchell said this week that he was ready to padlock the doors of the Thirsty Turtle, but that he didn’t have authority to do so.

The first two citations at the Thirsty Turtle, one in November 2008 and the second in August 2009, were for tampering with and refilling alcoholic beverage bottles with cheaper liquor and for serving alcohol to a minor, respectively.

The third violation came in the wake of an “integrity test” conducted by Mitchell’s staff on Sept. 23. Mitchell sent two student aides, both under the legal drinking age, to the Thirsty Turtle with their legitimate Maryland identification in an attempt to gain admission and buy alcohol.

Both students were let into the bar and were served alcohol, which was quickly seized by a county liquor inspector as evidence, Mitchell said. Liquor Control Board officials said a hearing has been scheduled on that violation for Nov. 3.

Mitchell said his department also conducted integrity tests at the Cornerstone and Bentley’s, and they passed “with flying colors.”

Additional scrunity came to the College Park restaurants and bars after four young men – three of them University of Maryland students under the legal drinking age – were found stabbed early Tuesday morning outside the Cornerstone after being ejected along with two other men from the Thirsty Turtle.

Police said the men argued over a barstool.

Officials said the hearing on that violation for serving alcohol to minors would probably not occur until after Oct. 26. Mitchell said Wednesday a letter had been hand delivered to the Liquor Control Board requesting that the hearing be expedited.