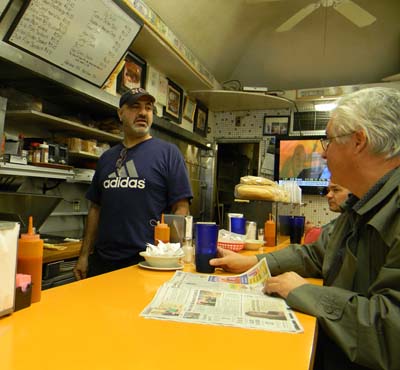 Ned Saah, owner of Peter's Carry Out in Bethesda, talks to customer Jean-Pierre Faure. Saah's diner is a half-mile from the National Institutes of Health, and he says 25 percent to 30 percent of his customers are federal workers who could be affected by a government shutdown. (CNS photo by Andy Marso)

"I don't like any of them anyway," Saah said Thursday while flipping a burger inside Peter's Carry Out, the small diner he and his wife own in Bethesda. "I think they're all worthless, useless. That's my opinion."

"It's better than Libya," says one of his customers, Jean-Pierre Faure. "Not much better, but it's better." Faure is from France, where he said government workers are "always on vacation."

Hundreds of thousands of federal workers in the U.S. could be headed for their own vacation -- one of the unrequested, unpaid variety.

If Democrats and Republicans can't agree on a budget by the March 4 deadline, the country will have its first government shutdown since 1995. That would deal a blow to a Maryland economy still pushing out of the recession.

Saah doesn't care too much for the senators and representatives on Capitol Hill. But a half-mile up the road is the National Institutes of Health headquarters, with 18,000 employees, and he'd like them to keep coming to work. Because they need lunch.

Saah said he does at least six deliveries to NIH every weekday, and more walk-ins. He estimates that 25 percent to 30 percent of his customers are federal workers.

He's not alone. Maryland is loaded with federal agencies, from NIH to the National Archives in College Park to the Centers for Medicaid and Medicare Services in Baltimore. Economically, Maryland stands to lose more than most states from a shutdown, especially if it lasts three weeks like the last one.

"This would have a devastating impact on our state," said Sen. Ben Cardin, D-Md. "In the short-term, obviously, it's the loss of salaries to federal workers. A large number of people would not be getting salary checks. That would have a direct impact on everything from the neighborhood diner to the dry cleaning establishments to the food stores."

Several employees outside NIH Thursday said they are not allowed to speak to the media, even on matters of personal finance. An employee of the National Parks Service, stopped along the National Mall Friday, said he had been instructed to answer "No comment" to any media inquiries about a shutdown.

The word "shutdown" is a bit of a misnomer. If past history is any indication, national security, inpatient medical care, food inspection, air-traffic control, law enforcement and tax collection would continue.

During previous budget impasses, less than half of the nation's 2 million federal workers were forced off the job. In a five-day shutdown from Nov. 13 to 19, 1995, about 800,000 workers were furloughed.

But the National Parks closed, veterans services were curtailed, the Centers for Disease Control and Prevention stopped health monitoring and research stalled at NIH.

"This would obviously hurt the local economy for two reasons," Van Hollen said. "One, you've got a lot of federal employees who would be without pay for that period of time. Secondly, Maryland ranks fourth in the country in terms of goods and services purchased by the federal government, coming after California, Texas, and Virginia."

Republicans and Democrats have been at odds since President Obama submitted his budget proposal on Feb. 14. Obama called for a spending freeze, while Republicans want to cut spending back to 2008 levels.

Around the corner from Peter's Carry Out in Bethesda there's Union Jack's British Pub, where Serena Steiner is the marketing and events coordinator. She used to be a waitress and remembers counting on a group of regulars from NIH to come in every Monday after work. They'd play pool, order some food, have a few beers.

"Monday nights, especially in the restaurant industry, are really slow nights," Steiner said. "I always knew that if no one else came in, they would come in. And they were really good tippers -- always at least 18 percent."

Steiner isn't sure if they will come in if they aren't working.

Saah isn't sure what his lunch rush will be like. He said he can't remember what it was like the last time the government shut down, but thinks it would be harder to absorb this time.

"I don't think they (federal workers) think it's going to happen," Saah said. "I guess they think it's so bad (economically) that doing that would hurt a lot of businesses in the area, so they're thinking no way that's going to happen. We're already in a bad way, you know what I mean? So we're not going to top it off by doing that."