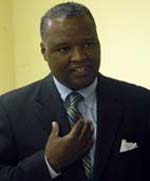 “You’ve got to fund your priorities, so education and public safety are our priorities,” Baker said at a morning news conference. “I don’t plan to wait until December. I plan to meet with the budget folks immediately.”

Baker, 51, a former state legislator, won Tuesday’s primary with about 44 percent of the vote, according to unofficial returns. Sheriff Michael A. Jackson came in second with about 33 percent, in a field of five candidates. About 2 percent of the precincts had still not reported Wednesday, but Jackson conceded the election.

No candidates from other parties had registered for the seat.

Baker said he plans to get public input on laws related to public safety, business and real estate in Prince George’s County.

“We have a very powerful delegation to Annapolis from Prince George’s County, and so one of the things is sitting down with them,” said the Cheverly, Md., resident.

Baker said winning was not easy – it was his third run for the seat -- but it was also not easy watching the county fail to take advantage of its full potential.

“When I came here in mid-eighties, late eighties, it wasn’t the Prince George’s County you see today, and we’ve started to make progress,” said Baker, who earned his law degree from Howard University in 1986. “But when you look at what we pay in our taxes, you look at our education, our income, it should be much better.”

The county is one of the most affluent majority African-American communities in the nation.

Baker’s name recognition, and the endorsement of Jackson by County Executive Jack Johnson just two days before the primary, may have helped Baker win this time, said Todd Eberly, a political science professor at St. Mary’s College of Maryland and acting director for the Center for the Study of Democracy.

“I’ve got to think that if the endorsement had come a week sooner, so that the Jackson folks could’ve capitalized on it, it may have tipped the balance,” Eberly said.

“He wasn’t running against an incumbent, so I’m sure that was also helpful,” said Isaac Salazar, communications director for the Maryland Democratic Party.

Johnson was barred by county term limits from seeking re-election after two terms.

Jackson, 45, who is serving his eighth year as sheriff in Prince George’s, was hit by negative publicity after an organization associated with his campaign sent out misleading campaign materials in the days leading up to Tuesday’s primary.

“Now that the campaign is over, there is a need for unity, for finding common ground, and for coming together for the good of our County,” Jackson said in his concession statement Wednesday.

“We’ve struggled, and we’ve triumphed, but ultimately, we did not win the necessary votes,” he said.