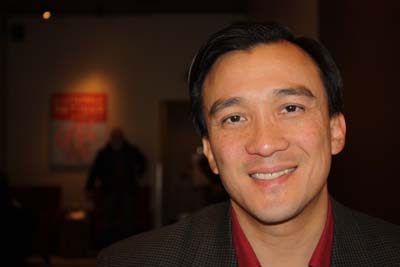 Han-Hoan Dang moved to Maryland in 1975 as a Vietnamese refugee and now often helps other refugees and immigrants as a way of paying it forward. (Photo and interactive map, linked below, by Maryland Newslines Ilana Yergin)

Refugee Migration to Maryland, By County, Since 1990


Vietnamese Refugee Recounts Family's Struggles to Make It in U.S.

SILVER SPRING, Md. - In late April 1975, shortly before the capture of Saigon by North Vietnamese forces, 8-year-old Han-Hoan Dang fled the city with his parents, two younger sisters and some of his extended family.

His grandfather -  an importer and exporter of sporting goods in Saigon who had done significant business with the Americans, French and British - feared persecution from the communists, and was able to get his family refugee status to flee to the United States.

At the airport they waited in lines for nearly 12 hours to board a plane that would eventually take them to Camp Pendleton in California. They left on a C-130 transport, its doors removed to make the plane lighter. All that stood between Dang and the ocean was a net and a G.I.

“It was kind of an adventure,” Dang said.

Dang, now 44, is one of the tens of thousands of refugees who in recent decades overcame difficult challenges to make a home in Maryland.

Since 1990, refugees and asylum seekers from Vietnam and the former Soviet Union – fleeing from fear of persecution following the end of the Cold War and the Vietnam War - have come to Maryland in greater numbers than from any other country.

More than 31,000 refugees have come to Maryland since 1990, all fleeing from persecution because of their religion, race, nationality, political opinion or membership in a social group.

The United States caps the number of refugees accepted each year, although the limit is often not met. According to an annual report released in April from the Office of Immigration Statistics, 74,602 refugees arrived in the U.S. in 2009, but the cap for that year was 80,000.

All of the refugees were eligible to receive assistance while getting settled. Up to $1,800 in assistance per refugee is funneled to local resettlement agencies by a program run by the State Department’s Bureau of Population, Refugees and Migration. The funds are meant to help refugees during their first 30 to 90 days here, according to the State Department. Some long-term financial assistance is also provided.

Refugees are expected to begin working and preparing to support themselves as soon as possible.

Many religious organizations help refugees with the resettlement process.

“The church came and kind of adopted us,” said Dang, of the Catholic Church, which gave his family clothes and toys.

“We’re the ones that welcome the refugees and make sure that they have safe, sanitary housing” and that they apply for all the benefits they are entitled to, said Mamadou Sy, director of Refugee and Immigrant Services for the Lutheran Social Services of the National Capital Area.

One of the most difficult problems refugees may have to overcome is their expectation of what the United States is going to be like, and that is why resettlement agencies often offer cultural orientation courses.

“Refugees come here sometimes with vastly inflated notions of what life will be like,” said Martin Ford, associate director of the Maryland Office for Refugees and Asylees. “Most of them get on their feet,” he said. “But it’s not easy.”

Dang remembers his own misperceptions about the country. “It’s kind of funny -- I thought it was going to be a bunch of apartments with air conditioning,” he said. “When I got here, I was totally surprised by how big it was, how spacious.”

When Dang’s family arrived, they moved into a refugee camp on Camp Pendleton. Many refugees live in a refugee camp prior to being resettled, although they are not all on military bases.

Dang describes his experience almost like someone talking about overnight camp. His family lived in a tent with 20 cots and hay on the ground.

It wasn’t, except for the cold desert nights that his family had to get used to.

Dang spent six weeks living on the base exploring and making friends, until one of his grandfather’s friends in Annapolis sponsored them, and they moved to Maryland. Either an agency or a friend or relative can sponsor refugees to help them get on their feet, providing them with monetary aid, job search assistance and more.

Once in Maryland, Dang’s family moved into an apartment with nearly 20 members of his extended family.

“It was actually a big improvement compared to the tent,” he said. “My family lived in the dining room. We all slept on the floor.”

Dang started school that fall. Although he should have been in the fourth grade, his parents placed him in second, thinking it would be easier for him since he did not know English.

He took English as a Second Language classes during school, but they were special group tutoring sessions held once or twice a week. For most of the school day, Dang had to struggle through courses taught in a language he didn’t understand.

“It was funny because I was with these second graders, and they were bigger than me,” he said. But after about six months, his teacher pulled him out of class and asked what grade he should be in.

“We walked right into the fourth grade class,” said Dang with a smile.

Sy, a refugee himself, said learning the language is key to becoming self sufficient.

Dang’s family learned to speak English by total immersion, one of the fastest ways to learn a new language.

“I remember my parents telling me when we first got to Annapolis, ‘You’re not allowed to speak Vietnamese anymore,’ ” said Dang. He had learned French at school in Vietnam through total immersion, too, so he understood the concept and remembers picking up English pretty quickly.

The downside was that he and his two younger sisters forgot much of their Vietnamese and culture as quickly as they were becoming American.

It wasn’t until Dang was a teenager and his mom met another Vietnamese family that she realized it would have been possible for the kids to learn English while maintaining their sense of Vietnamese culture.

“She had met some other families whose kids still spoke Vietnamese very well, and they were doing very well in school,” he said. “I think she had buyers’ remorse.”

Dang was then asked to only speak Vietnamese at home.

Many refugees do "find a way to balance the two” cultures, said Sy. “They still get some parts of their culture" yet find a way to integrate.

As an adult, Dang now lives in Silver Spring and volunteers with the local Vietnamese community, specifically with other refugees. He was working at Lockheed Martin doing regulatory compliance until earlier this year, when he left and unsuccessfully ran for state delegate.

Friends and neighbors helped his family, and he considers his volunteer work a way to honor them.

“When my family came here we didn’t know anything,” he said. “We would’ve had a difficult time” without help.

Correction: An early edition of this story had the wrong month for the Dang family's flight from Vietnam. The date has been corrected here.