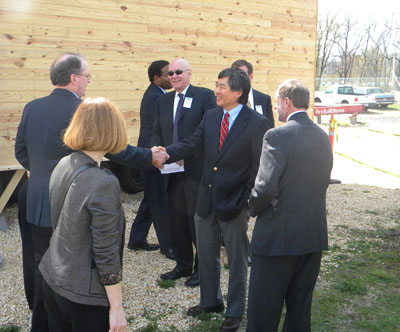 COLLEGE PARK, Md. - Imagine a house surrounded by manmade wetlands.  On one wall, native fruits grow off vines.  Inside is a waterfall to promote humidity control, and water runs under the house’s middle to filter storm runoff.

That’s the vision of a University of Maryland team building a solar-powered house for an international competition sponsored by the U.S. Department of Energy.

The Maryland team held a “shed raising” ceremony Thursday to highlight the university’s entry into the biennial Solar Decathlon.  DOE challenged Maryland and colleges and universities around the world to build solar homes that are livable and affordable.

Maryland’s project “is a model of how to live in harmony,” said President Wallace Loh. The WaterShed home will use water efficiently and effectively, spokesmen said.

Nearly 300 students have been involved in the WaterShed project, some putting in as many as 70 to 80 hours a week, said Parlin Meyer, a graduate student in the School of Architecture, Planning and Preservation.

For almost two years, students in various majors across campus contributed to the project, some as parts of their classes, others through independent initiative.

WaterShed submitted its plan for the house in March 2010.  A month later, the team heard it was one of 20 finalists.

“Since then, it’s been full steam ahead,” said Allison Wilson, another graduate student in architecture.

The first building materials were delivered two weeks ago, and students are now beginning to build the house.  The team must complete construction on the house by September, before moving it to a park between the Lincoln and Jefferson memorials in Washington, D.C.

Teams from all schools are responsible for moving their houses to Washington in October, regardless of whether they are from College Park or Hawaii.

Even though the University of Maryland is the closest entrant to the nation’s capital, students still had to examine the route the trucks would take to ensure the house was not built too tall to pass under bridges, said Scott Tjaden, a senior environmental science and technology major.

Each school receives $100,000 from the Department of Energy to help with labor costs. Solar Decathlon homes generally cost between $250,000 and $650,000 to build, Gardner said.  The schools must raise the remainder of the money.

Students and faculty on the Maryland team come from seven colleges across campus, blending students with majors like architecture and engineering to cover all aspects of the house’s construction.

The decathlon is made up of 10 competitions pitting the houses against each other in different categories, including architecture, engineering, energy balance and market appeal.

In 2007, Maryland placed higher than any other U.S. school and second overall with its entry.  Since the competition began in 2002, this is the University of Maryland’s fourth project.