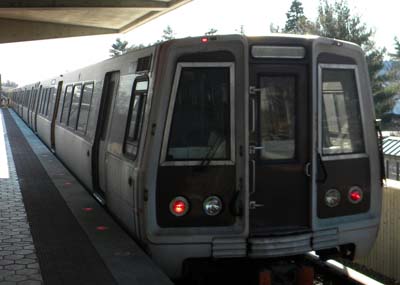 Selling the naming rights to Metro stations could raise as much as $2 million. (Photo by Maryland Newsline's Alexander Pyles)

WASHINGTON D.C. -- A budget proposal presented to the Metro board of directors last month estimated the agency could make between $1 million and $2 million a year selling station naming rights to corporate sponsors.

Kay Dannen says that's reasonable, and though Dannen is about 2,800 miles away from any Metro line, she has more insight into the plan than most.

For about 10 years, Dannen has managed a program that sells the naming rights to Portland, Ore., streetcar stops to local businesses for $500 a month. She said the program brings in about $250,000 a year, but Metro could make much more.

The Washington Metropolitan Area Transit Authority could use new revenue streams. The agency's operating budget is projected at $1.46 billion in fiscal year 2012, and spokesman Steve Taubenkibel has said there may be a $72 million shortfall.

Taxpayers in Maryland and other Metro jurisdictions could be asked to increase their subsidies. Last year Maryland paid $228 million into Metro from the state's Transportation Trust Fund, according to Jack Cahalan, director of the Maryland Department of Transportation's Office of Public Affairs.

Capital improvements would be welcome too. Some Metro stations are more than 30 years old, including Farragut North, where a chunk of concrete fell onto the platform last November while crews were working on the street above. A crash on the Red Line in June 2009 killed nine people after an automatic train-control system failed.

President Obama's budget included $150 million for Metro, but House Republicans nixed that in their continuing resolution.

Corporate money could help. But Dannen said selling sponsorships without turning off riders can be a balancing act.

In Portland, stops are identified by street names as well as sponsors. The businesses get their names on each side of the stop shelter and in an audible announcement inside each car when it reaches the stop. Dannen also sells sponsorships of the cars themselves for $25,000 per year.

Portland's stops have sponsors like "The Ardea Apartments," "Julie Lawrence Yoga Center," and "Debbie Thomas Real Estate." Aside from the "Residence Inn by Marriott" stop, there's not a multinational corporation in the bunch. Dannen said that's by design.

"I focused on businesses, retail properties and constituents along the (streetcar) alignment," Dannen said. "For the most part, I didn't go out into the suburbs and try to get a sponsorship for our streetcar downtown. Not that I couldn't. I've gotten calls from all over the country wanting to sponsor."

The temptation is growing, especially with a streetcar expansion in the works.

"If NBC called and decided they wanted to sponsor a car and they wanted to pay us a half-a-million dollars, we'd probably take that," Dannen said. "Because that's a lot of revenue. But I don't know how that would sit with the rest of the sponsors, quite honestly."

In Maryland, there's also the question of how it would sit with riders.

Takoma Park Mayor Bruce Williams said selling the station naming rights was not a good idea, whether they were sold to local businesses or multinational corporations.

"I can't imagine local businesses coming up with the kind of money to be able to make a significant dent in Metro's funding difficulties," Williams said. "But it has always struck me as odd how advertising -- the way it goes on just about anything. I resist wearing clothing that has corporate stuff on it."

Williams said he couldn't imagine the "Takoma" Metro stop being called anything else.

"The only reason I can think of for changing station names is when they're adding something that's a large institution that a lot of people would be heading for," he said.

Peter Benjamin represents Montgomery County and Maryland on Metro's board of directors. He said seeking corporate sponsors was just one of many proposals General Manager Richard Sarles had developed. All of the proposals are intended to reduce the increase in subsidies for jurisdictions like Maryland.

"He's talking about an increase anyway," Benjamin said. "And he's saying, 'If you don't want to have that much of an increase, here are alternative ways of doing it.' "

Benjamin said the board would review the proposals in the spring.

Dannen said selling naming rights could be a boon to public transit and the local economy, if done properly.

"It depends on your philosophy," Dannen said. "You're always tempted by the money from the sponsorships. ... Our philosophy is, we've kept this a very community-based system, and that's really what's made it successful, in our opinion."