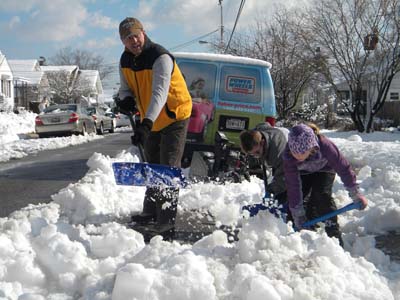 Mike Murtha, 43, his son Sasha, 10, and daughter Kristina, 9, shovel snow in front of their home on Poplar Avenue in Arbutus, Md., on Thursday. More photos in slide show. (Photo by Newsline's Alexander Pyles)

BGE: More Outages This Year Than During 2010 Blizzards

ARBUTUS, Md. - As Mike Murtha worked with his family to clear the sidewalk and driveway at his home on Poplar Avenue, he couldn't help but think how lucky he was.

Murtha, 43, never lost power at his southwest Baltimore County home as snow fell Wednesday afternoon and evening, though there were a few moments when he was nervous.

Murtha wasn't kidding; more Baltimore Gas and Electric customers lost power as a result of Wednesday's snowstorm than in 2010's back-to-back blizzards, a BGE statement said, because of the wet snow that dragged down trees and power lines.

As much as 12 inches of snow fell in some parts of the state, including Montgomery and Baltimore counties, the National Weather Service reported.

As of 2 p.m. Thursday afternoon, more than 12,000 customers remained without power in Baltimore County, a total exceeded only by Anne Arundel County's 37,780 customers.

In total, nearly 77,000 BGE customers were still without power, less than half of the original total of more than 200,000 customers since Wednesday.

"We are working to get everyone back as safely and quickly as possible," said Linda Foy, a BGE spokeswoman.

Foy said crews were on the way from Kentucky, Tennessee, Ohio and North Carolina to assist in the restoration of power, but some of those reinforcements may not arrive in the area until Friday. More than 1,000 BGE employees already in Maryland are working, she said.

Employees are working 12- to 16-hour shifts in the field, and at the storm center, call center and other locations, a BGE statement said.

Repairs have been slow in some areas, Foy said, because trucks may not be able to traverse tight side streets. Other equipment may not be accessible due to road conditions.

"There are some challenges," Foy said. "Depending on the conditions or the situation, we may not necessarily have to wait (to restore power to an area), but if you're not able to get your bucket truck, for instance ... sometimes the crews will have to actually take the equipment they can carry."

BGE has not provided an estimated completion time for all power restoration, Foy said, in part because that is dependent upon how quickly reinforcements arrive.

Meanwhile, Pepco announced that it expects all power to be restored in Montgomery and Prince George's counties and Washington, D.C., by 11 p.m. Friday, its website said.

Montgomery was hit especially hard, and still had more than 113,000 customers without power Thursday afternoon. That's more than 37 percent of Pepco's total number of customers in that county.

Less than 12 percent of Pepco customers in Prince George's County were without power as of Thursday afternoon, or about 22,000 people.

Less than 10 percent were without power in the District.

Even for those still with power, Thursday was a challenge.

Will Sipes, of Arbutus, said he was one of the last on his block to shovel the sidewalk.

"I'm the late guy," he said, hat pulled tightly over his ears. Sipes said he likes snow but "not when it's a lot."

Murtha and his family, including 9-year-old Kristina and 10-year-old Sasha, who helped their father shovel the sidewalk Thursday afternoon, were just grateful there wasn't as much snow on the ground as last year.

"Yeah, I like the snow, I like the thought of the snow," Mike Murtha said. "This is easy compared to last year."

His shoveling job was made easier, he said, by snow plows that hit his one-lane street earlier than usual. The road surface was largely without slush and stripped down to blacktop Thursday morning.

And Murtha had a theory for why his little street received such quick attention.

"I think it helps that (former Maryland governor Robert) Ehrlich used to live in Arbutus," he said. "So I think he still has some pull."