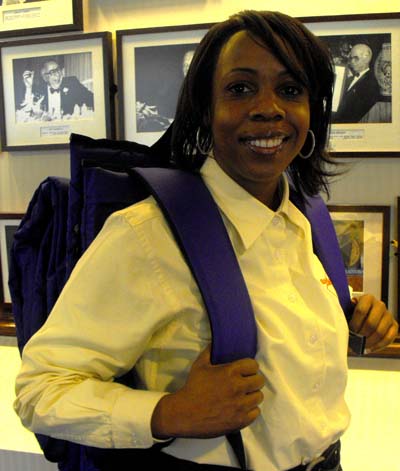 Shirley Hayden wears her invention, the Unique Seat --a backpack that converts into a seat for one to two people. (Photo by CNS' Jessica Harper)

WASHINGTON - After years of placing her electric toothbrush on her bathroom sink top, Lisa Morris decided to find a more creative place to store it.

"It would always fall off, so I said, 'Someone needs to come up with an idea to hold this thing,' " she said.

Morris discussed her dilemma with her husband James, an artist who paints and draws. Her idea became the impetus for her husband's self-designed organizer called "The CloverHolder."

The Catonsville couple is among 22 inventors who gathered at the National Press Club Friday for a pitch-a-product casting call in honor of National Inventors' Day.

The pitch session, hosted by Telebrands Corp., is an open casting event for inventors across the country eager to market at-home products that are as unique as they are helpful.

TeleBrands, headquartered in Fairfield, N.J., was founded in 1983 by CEO A.J. Khubani. The company seeks inventions to market to consumers from all over the world, and it has launched more products through direct response television than any other media corporation, according to its Web site.

As early as 9 a.m., the 22 inventors crowded into a 13th-floor conference room to make their pitches. Each creator was given five minutes to sell their ideas to a panel of judges that included Khubani, Telebrands blogger Tom Zarzecki and Telebrands Vice President Manish Israni.

Israni said the day is especially interesting for the judges because they get to see ideas from the grassroots.

"We get to see real inventors with their passion and energy and hard work and great ideas," said Israni. "If we end up choosing their product and it becomes a big hit, it is a real sense of satisfaction for us and the inventors."

Israni said Telebrands has held casting calls everywhere from Los Angeles to Philadelphia. He is responsible for drawing up licensing agreements with those whose products are selected.

Typically one or two products, Israni said, are chosen from each event, and their inventors are notified anywhere from two weeks to two months after the event.

Contracts are awarded to successful inventors, but Public Relations Manager Andrea Pass declined to disclose what those might be worth to the inventors.

Of all the inventions, John Twerdok's "Frank Former" -- a cutter that transforms cooked hot dogs into little men -- and Gina Bommarito's "Picture Wizard" -- a helpful picture-hanging device -- seemed to strike the loudest chords with the judges.

"We've never seen anything like the Frank Former," said Zarzecki. "That's cool to us. On a one to 10, the fun factor is a 10. Novelty stuff sells."

"I like the hot dog invention, but I also really liked the picture-hanging tool. It's a very simple device. It took five seconds to hang the picture," said Israni. "That's probably the simplest picture hanging device I've seen. You measure the picture, use the hammer and you're done."

Bommarito traveled from Hazel Park, Mich., to attend the casting call and Twerdok came from Pittsburgh.

Two of the 22 inventors at Friday's event hailed from Maryland, with creations ranging from the Morrises' CloverHolder to the Unique Seat, an all-in-one seating device designed for one to two people by Clinton native Shirley Hayden.

"I was really excited to have him sit down on the seat with me, and try it out," said Hayden, an alumna of University of Maryland's Hillman Entrepreneurs program. "Hopefully, I'll sign a contract soon and won't have to do too many more pitches like this."

The Morris family, who founded West End Designs in 2005 and showcases The CloverHolder at www.CloverHolder.com, has already won an award for their invention -- a gold medal from Family Group Magazine.

The couple has presented their product on PBS invention show "Everyday Edison" and at local craft shows and expos.

"Just look at the quality of it," James said, throwing the organizer on the ground to test its durability.

"It doesn't break," he said. "We make it from polycarb, but it can also be made out of gold or inlaid with diamonds for those with expensive tastes."

And it glows, too.

"We can even make it with a fluorescent piece, so in the daytime, it draws in the sun," said James, "and at night, it puts off a light."

Lisa and James say working as a team has its pluses and minuses.

"We've had our fights over this thing," James said, chuckling.

"That's because we're married and we work together," said Lisa. "But, his expertise really is the creative end."

"And she keeps me organized," said James.