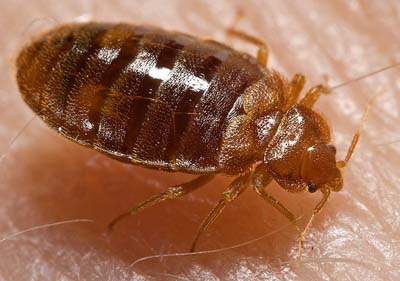 Bed bug populations are on the rise in Washington and other cities across the country. It can take several treatments to rid a home of the pests. (Photo courtesy the CDC Public Health Image Library)

Bed Bug FAQs from the Centers for Disease Control and Prevention

The Bed Bug Registry Is a Database of Bed Bug Reports

WASHINGTON - If the nation’s capital wants to contain its bed bug problem, its residents, pest control experts and property managers must put long-term action plans into place, a Maryland-based entomologist said Thursday at a summit on the insect.

“You need to recognize high-risk locations,” and be proactive with prevention, said Larry Pinto, a Mechanicsville, Md.-based entomologist who gave the keynote address at the summit hosted by the D.C. Department of Health.

A report released this summer by the pest-control company Terminix ranked Washington, D.C., as the ninth most bed bug-infested city in the country; it ranked New York City as No. 1.

A joint statement released in November by the Centers for Disease Control and Prevention and the Environmental Protection Agency said the U.S. is now one of many countries “experiencing an alarming resurgence in the population of bed bugs,” which had declined in the mid-20th century.

But their presence is not limited to apartments or low-income housing.

The pests often “hitchhike” on people traveling internationally, and can now be found in almost any setting, Pinto said. This includes bathrooms, office file cabinets and even the brushes of vacuum cleaners.

He said people such as social workers, who often make visits to high-risk sites, should wash and dry clothing immediately after work, since bedbugs are sensitive to dryer heat.

Purchasing pesticides and cockroach-killing sprays is not recommended to eliminate them. Rather, tenants and homeowners are urged to contact pest control professionals for a series of treatments.

Although bedbugs feed on the blood of people and leave itchy welts and rashes, they are not disease carriers, officials say.  But they can cause a variety of “negative health, mental health and economic consequences,” the joint CDC/EPA report said—including “mild to severe allergic reaction to the bites” and anxiety and insomnia.

Reactions to bedbugs can be extreme, Pinto said.

People “do some pretty crazy things, like bathing themselves in kerosene,” he said. “Their first gut reaction is to throw everything they have out.”

But that doesn’t work, he said. The bugs almost always return unless treated by professionals with a combination of pesticide, vacuum and heat treatments.

Instead of overreacting, Pinto said, citizens and landlords need to constantly monitor infected homes, by visually inspecting for bedbugs and keeping an eye out for bruises on the skin. Three treatments by a pest management company are typically needed to completely rid a home of an infestation, he said, and the bill can run anywhere from $350 to $1,200.

For those who aren’t quite ready to lay down the cash for long-term bedbug treatment, Pinto suggested taking some simple measures, such as placing mattresses within encasements.

When moving into a new apartment or traveling, he suggests looking for blood smears on walls and ceilings, hotel beds and headboards. The smears would indicate the bugs’ presence, because homeowners are likely to crush the bugs.

“Reinfestation is almost guaranteed,” he said. “You need a permanent monitoring program.”