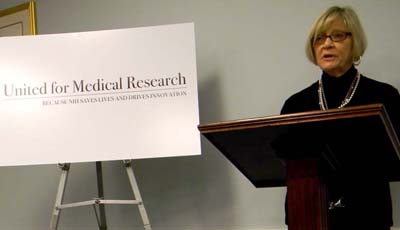 WASHINGTON - When doctors told George Ann Blough she had ovarian cancer, the Catonsville native was certain the fall of 1990 would be her last.

"My husband and I were driving to our place in West Virginia," said Blough, who has been at stage four since 1997 and is currently in remission. "And I thought, 'You know what? I'm never going to see the leaves change again.'"

Thanks to funding for cancer research, Blough has watched the leaves change for the last 20 years.

Now a volunteer for the American Cancer Society Cancer Action Network, she joined a mix of congressmen, doctors and health advocates Wednesday for a news conference on Capitol Hill lauding the efforts of United for Medical Research, a coalition group advocating for funding for the National Institutes of Health.

NIH relies on congressional dollars for biomedical research. President Obama recently rolled out a $3.7 trillion budget for fiscal year 2012 that would, among other changes, allocate an additional $900 million to help trigger more research and innovation for biomedicine.

Before that happens, House Republicans are proposing a continuing resolution that, if passed, would trim NIH's 2011 budget by $1.6 billion.

Biomedicine refers to the drugs, radiation treatment or surgical procedures doctors use to treat diseases like cancer.

Blough thanked UMR for its work to highlight members of Congress who lead the effort to increase funding for medical research.

"Because of cancer research and your leadership in stressing the importance of funding, I am alive today," she said.

But this progress is at risk, Blough said, without more members of Congress making research a priority. 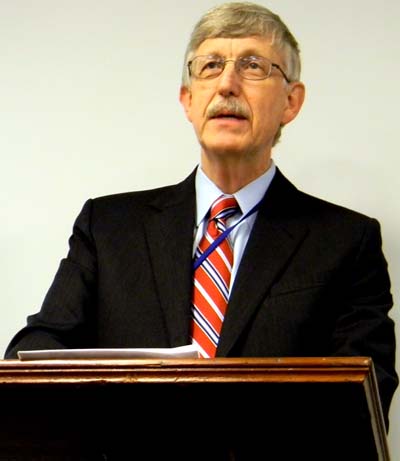 Sen. Ben Cardin, D-Md., was one of two senators at the conference. He said ending health disparities -- inequities in health care access along racial and socioeconomic lines -- would free funding for biomedical research.

"A study conducted by John Hopkins and the University of Maryland showed that we are losing about $50 billion a year because of health disparities," said Cardin.

"My challenge to you all is to figure out a way to solve that, and then we'll give you $50 billion you can use for research," he added, amid a few chuckles.

"Nowhere are health disparities more evident than in Baltimore City where there is a 20-year gap in life expectancy between those who live in more affluent neighborhoods and those who live in poorer areas in the city," said Cooper.

"And the death rate from cardiovascular disease is astounding. Nearly 2,200 Americans die every day from it," she said.

Cardin said Maryland is a leader in the health care field.

"I just think about how many people come to my state of Maryland every year from around the world," he said. "They come to NIH; they come to the University of Maryland Medical Center; they come to get their medicine, their training and to be inspired."

In the wake of this conference, funding for biomedical research is emerging as an issue with bipartisan appeal. In April 2010, 25 governors signed a bipartisan letter to congressional leaders supporting a $1 billion increase for NIH this fiscal year, according NIH.gov.

Blough credits the drug Taxol with sending her ovarian cancer into remission, medicine that took 30 years to fund.

"But how many women died of ovarian cancer during this time?" Blough said.

"I know I'm very lucky, however, I still see people dying and being devastated by this disease. Without additional support, progress will be stalled or lost," she said. "We need more funding for research."

Health care generally continues to dominate the conversation on Capitol Hill. The Department of Health and Human Services announced Wednesday that Maryland is one of only seven states and state consortiums to receive a $6.2 million competitive federal grant to advance Maryland's efforts to create a statewide health insurance exchange.