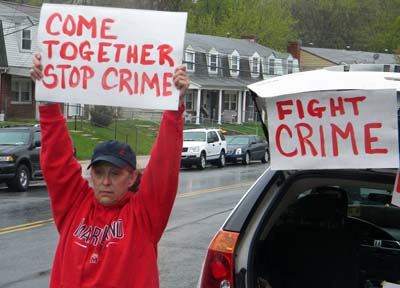 Karen DeSha, the mother of slain University of Maryland student Justin DeSha-Overcash, has rallied on Barlowe Road in Palmer Park once a month since February. (Photo by Maryland Newslines Alexander Pyles)

DeSha is the mother of Justin DeSha-Overcash, a 22-year-old University of Maryland senior shot to death in his home in January.

Since February, DeSha has been driving here once a month from her home in North Carolina to demonstrate in front of Prince George’s County Police headquarters in what she said is an attempt to get enough people angry about murder in the county to do something about it.

There have been 35 homicides in Prince George’s County this year.

“This is my mission,” DeSha said. “It’s my road, until something good comes from (what happened).”

She talked about the anger she felt when police emphasized that drugs were found in the College Park, Md., home her son shared with roommates.

She cried when she said she’d never see her son marry and have children of his own.

Pedestrians walking on a sidewalk across from her spot on Barlowe Road shouted thanks to DeSha throughout the morning, encouraging her to keep rallying.

Many cars barreling down the street slowed to a near-stop when they saw DeSha and her white cardboard signs, which were bleeding red paint in the morning downpour:

Tony Jackson, 25, a Palmer Park resident, crossed the street to talk with DeSha around 11 a.m. Jamaican-born, Jackson said he had lived in Prince George’s County with his parents for seven years. He said he thought the neighborhood used to be more dangerous than it is now, but was glad to see DeSha trying to rally the area.

“This is good,” Jackson, a welder, said. “Once they see ya’ll doing this, it’s going to make the neighborhood come together.

“It’s time to stop the crime.”

“I think it’s important that the homicide unit and detectives don’t lose focus on what they’re here to do, close the case,” Straughan said. “In this particular case, (what happened to DeSha’s son) was a tragedy. … I think in Ms. Desha’s case, homicide detectives worked long and hard. Our focus is one focus only.”

Police arrested Stephan Weaver, 22, of Bowie, Md., on March 26 and Deandre Ricardo Williams, 23, of Washington, D.C., on March 30, charging both with first-degree murder. Both men have confessed their involvement in the crime, police said.

Many drivers honked their car horns while they and passengers waved. Even if in mid-sentence, every honk gave DeSha pause.

“They all wave,” she said. “These people are tired.”

DeSha appeared tired, too. Dark circles rimmed her eyes. Her voice fluctuated and cracked unpredictably in conversation. Her tears became impossible to differentiate from the raindrops that also trickled down her face.

She admitted she was running on adrenaline these days.

She said she’s not standing on Barlowe Road holding her signs just to honor the memory of her fallen son. DeSha said she’s there because something good must come of her son’s death for her to cope with it.

“I don’t know what one person can do,” DeSha said. “But my son made a difference.”