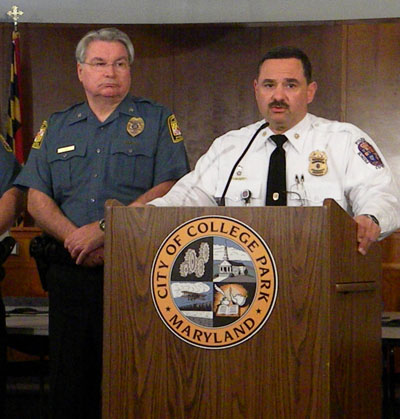 University of Maryland Police Chief David Mitchell says the Thirsty Turtle has failed to prevent underage patrons from drinking at the bar.


Prince George's County District 1 Commander Robert Liberati outlines the multiple circumstances that led to the stabbing of four people outside the Thirsty Turtle.

COLLEGE PARK, Md. – Police early Wednesday arrested a Kensington man in connection with the stabbing of four men near the Thirsty Turtle bar, in what police are describing as a worsening trend of alcohol-fueled incidents in downtown College Park.

“He is the person that we saw in the video and the still pictures, and he was responsible for the cutting,” Liberati said at a press conference.

Ramos was charged with three counts of attempted second-degree murder and four counts each of first-degree assault and intent to injure with a dangerous weapon.

One of the stabbing victims was Leonardo Ramos’ older brother, 23-year-old Jose Ramos, police said Wednesday. The other three victims - Eric Gaul, Amir Itani and Matthew Stevens - are all University of Maryland students.

“It gets back to a bar that caters to underage drinkers that is not a good neighbor to our university,” Mitchell said.

Police said the Ramos brothers and the three students got into an argument over a bar stool at the Thirsty Turtle and were all ejected by bouncers. The incident escalated into a physical confrontation across the street near the Cornerstone Grill and Loft, when police said Leonardo Ramos “was being assaulted by multiple individuals,” and pulled out a folding knife and began stabbing the victims.

The victims were found by police on the corner of Baltimore Avenue and Knox Road at about 1:30 a.m. on Tuesday, police said.

Jose Ramos said in a written statement to police that he was cut by his brother while trying to help him. Leonardo Ramos fled the scene while the four victims, including his brother, were transported to area hospitals, police said. Gaul sustained stab wounds to his left side and back, Itani was cut on the cheek and Stevens was stabbed in the lower back and elbow, police said.

Police said Gaul, Itani and Stevens were all admitted to the Thirsty Turtle after displaying Maryland identification showing that they were each under the legal drinking age.

For the second consecutive day, Mitchell railed against the Thirsty Turtle, which officials said has been cited and fined three times in the past two years for various violations of its liquor license, including previous incidents of serving alcohol to underage patrons. Each fine was about $5,000, said John McGroarty, a liquor inspector with Prince George’s County.

The most recent incident was Sept. 23, Mitchell said, when his department engaged in what he called an “integrity test.” That night, Mitchell said he sent two of his student aides, both underage, to the Thirsty Turtle in an attempt to gain entry. The aides presented their identification to security at the door, showing they were not of legal drinking age.

“They clearly demonstrated they were under 21,” Mitchell said. “It seemed as though that those standing at the door, one of whom was the owner, were very interested in taking their money.”

The student aides gained entry to the bar, paid a cover charge and ordered two alcoholic beverages. A short time later, the aides summoned a liquor inspector to the Thirsty Turtle, who seized the drinks as evidence and cited the bar for serving alcohol to minors, Mitchell said.

Mitchell said Tuesday that he was ready to “padlock the doors” of the Thirsty Turtle, but that it wasn’t his decision to make.

“Clearly, this is not a good place to hang out,” Mitchell said. “What makes the Thirsty Turtle worse than any other bar in the area is the demonstrated failure to properly card students and other underage drinkers.”

A manager at the Thirsty Turtle Wednesday declined to comment, and refused to give his full name.

Mitchell said a letter was hand delivered to the Prince George’s County Liquor Control Board Wednesday morning requesting that a hearing about this most recent incident be expedited.

McGroarty said Wednesday he expects the liquor board to hold a hearing on the Thirsty Turtle’s liquor license soon.