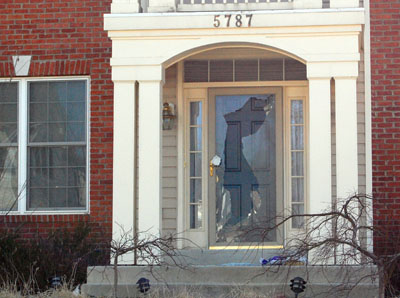 The glass front door of this foreclosed home on Oak Forest Court was shattered. Many homes in the Hunters Brooke subdivision originally sold for more than $500,000 but have lost nearly one-half their initial value. (Capital News Service Photo by Steve Kilar)


Arson and Foreclosure in the Hunters Brooke Subdivision


In December 2004, arson damaged 16 homes under construction in the Hunters Brooke subdivision in Charles County. Other homes have been foreclosed, in part due to discriminatory mortgage lending practices. (Capital News Service Map by Steve Kilar) Source: federal and state court and tax records

INDIAN HEAD, Md. - Around 4 a.m. on Dec. 6, 2004, William Fitzpatrick left his guard post at the Hunters Brooke subdivision construction site, where more than two dozen homes were nearly complete. Shortly after, the buildings would be in flames.

The neighborhood, one arsonist said, was "going black," and it had to be stopped before more blacks -- one family was already there, sleeping soundly -- moved in later that month. So after Fitzpatrick left, five young white men crept into the neighborhood and left behind 16 scorched, unlivable houses.

The Hunters Brooke fire, which garnered national attention and was deemed the state's largest arson, could have defined the burgeoning community, but it didn't.

Instead, another type of racism has shaped this subdivision: Discriminatory mortgage lending practices.

The arsonists were indicted within about two weeks of the crime. Fitzpatrick was accused of lying to investigators, but that charge was later dismissed. Most homeowners rebuilt, and the development expanded. Three of the arsonists have already been released from prison.

Other than a six-year-old civil case, the fire seems relegated to neighborhood history.

"Believe it or not, I don't hear people talking too much about it," said Louis Gramby, who lives in the subdivision.

The mortgage crisis, however, is still fresh in the community's conscience.

"For Sale" signs outside foreclosed houses are visible at nearly every turn in Hunters Brooke, where five years ago many properties sold for upwards of $500,000 and now have dropped one-third of their initial value. Dozens of the neighborhood's approximately 200 homes have gone through foreclosure in the last few years.

High foreclosure rates are common in subdivisions built at the peak of the housing bubble, said R. Andrew Bauer, a Baltimore-based regional economist for the Federal Reserve Bank of Richmond.

Many buyers took out high-rate loans because they expected home values to rise, enabling them to refinance later at a better rate, Bauer said. When housing values fell, some owners couldn't repay their original high-rate notes.

Blacks in Maryland who bought homes between 2004 and 2006 were more than twice as likely to receive subprime rates for their first mortgage as whites with the same income, according to data collected by the federal government and analyzed by Capital News Service.

Race-based disparity in mortgage lending has been confirmed by several studies, including those by New York University, the Center for Responsible Lending and regional Federal Reserve banks.

The National Association for the Advancement of Colored People, headquartered in Baltimore, has filed similar cases across the country against Wells Fargo and other major mortgage companies.

In the mid-2000s, houses financed by subprime loans were more than 50 percent of the completed foreclosures in Maryland, even though subprime mortgages were only about 10 percent of all home loans, according to analyses by the Federal Reserve Bank of Richmond, which monitors Maryland's housing market.

As a result, blacks buying homes are more likely to go through foreclosure than whites. The demographics of homeowners in Southern Maryland seeking help for foreclosure bear out this trend.

About half of the people who request foreclosure help from the region's most prominent homeowners' assistance program are black, said La-Ronda Johnson, the housing counseling manager for Southern Maryland Tri-County Community Action Committee Inc. But in the three counties the group serves -- Charles, St. Mary's and Calvert -- blacks are only about a quarter of the population.

"We've had our share of foreclosures," said real estate agent Clifford Levins, who lives about a block from the arson site in the Hunters Brooke neighborhood. Six of the eight homes on his street, Veronica Court, have been in foreclosure over the last few years.

Like most Maryland counties, the number of foreclosure events -- defaults, auction notices or bank repossessions -- in Charles County exploded between 2006 and 2010, multiplying more than five-and-a-half times, according to RealtyTrac, a company that monitors the foreclosure market.

The foreclosure numbers declined slightly in Charles County last year. But in the section of the county containing Hunters Brooke, the number of foreclosure events continued to rise.

The foreclosures in Hunters Brooke are sore thumbs -- repossession signs are bandaged to the front doors and combination locks hang from the knobs.

A pile of shattered glass that used to be the front door litters the stoop of a vacant home on Oak Forest Court, just across from the community baseball diamond and swimming pool.

Four FedEx envelopes, each with the notice "Important Information for Bank of America and Countrywide Home Loans Customers," lay weathered and unopened in the unkempt garden.

Mortgage giant Countrywide, bought by Bank of America in 2008, had a history of questionable lending practices that were challenged in courts across the U.S., including cases that alleged the company targeted black borrowers for high-interest loans.

A home on Cabinwood Court, one of the streets affected by the arson, has the phrase "God bless this home" inscribed in the sidewalk's cement, but the front door carries another message: "This property is now under the management of Statewide Real Estate." In back of the vacant house, a little purple teddy bear, dirty from the elements, is sprawled on the steps.

Mortgages with high "subprime" interest rates go into foreclosure at a much higher rate than other home loans because they often have reasonable "teaser" loan rates for the first few years that make the monthly payment affordable, said Debbie Bocian, a senior researcher at the Center for Responsible Lending in Washington, D.C.

"Something that someone thought was affordable ended up being completely unaffordable," said Bocian. Eventually the variable loan rate skyrockets and monthly payments increase by as much as 40 percent.

About one-fourth of the houses in the section of the subdivision targeted by the 2004 arson have also been through foreclosure. Nearly all of these houses were financed with high-interest, adjustable-rate mortgages, and nearly all were bought by blacks.

There is no industry standard for defining what makes a home loan "subprime," said Kate Titford, counsel for NeighborWorks America, a nonprofit that advocates for affordable housing.

But it's clear that if a mortgage rate is reaching into the teens, it should be considered a predatory home loan, said Johnson, the housing counselor.

In many cases, interest rates on foreclosed Hunters Brooke homes started as low as 6 percent and then more than doubled. In one instance, the interest rate ceiling was above 15 percent, according to Charles County Circuit Court records.

In Hunters Brooke, bad loans flourished. The subprime mortgage pattern, as described by Bocian, was repeated throughout the subdivision.

"It could be that there are some lenders that are overtly discriminating, that they treat white borrowers, black borrowers and Latinos differently when they walk through the door," Bocian said. "But there is also a market segmentation that has happened as a result of generations of redlining in which traditional lenders underserved certain communities, and as a result, subprime lenders began targeting these traditionally underserved communities."

The Charles County branch of the NAACP is aware of the issue of lending bias, said Alfred T. Jackson, the group's president, but the association has not received any complaints of racism in mortgage lending.

The county, which was almost 70 percent white in 2000 and is now about 50 percent white, has a history of racially motivated crime. There were 25 hate crimes investigated by the Charles County Sheriff's Office in 2006, the five-year peak of such crimes.

Nevertheless, the number of blacks living in the county nearly doubled over the decade -- according to U.S. Census Bureau figures released in February. Despite that, county sheriff records do not show a clear downward trend in the county's hate crime rate since 2005.

But the most recent federal data, mandated by the Home Mortgage Disclosure Act, shows that in 2009 blacks were still more than one-and-a-half times as likely as whites to obtain high-interest mortgages when purchasing a home in Maryland.

The slight decrease in disparity between white and black borrowers, however, is mostly due to the waning of the subprime mortgage market after the Wall Street meltdown in 2008.

"There were so few subprime loans that were made in 2009 ... throughout the country you see very little disparity because very few of those loans were even made," said Bocian. "The subprime market has pretty much collapsed."