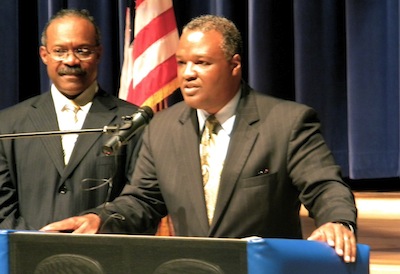 UPPER MARLBORO, Md. - Rushern Baker III, the Democratic nominee for Prince George's County executive, announced the leaders of a transition team Tuesday that will be chaired by a former county executive.

Democrat Wayne Curry will head the team of prominent businessmen, elected officials and university and college presidents charged with finding ways to spur job growth and economic development, improve the county's schools and increase responsiveness to residents' needs. "I asked a very talented group of men and women to help me shape the future of this county," said Baker, during a press conference at Dr. Henry A. Wise High School.  "We want to make sure that our county is not only more efficient and effective in delivering services, but that it stimulates a positive economy so that we can take advantage of the resources that we have." Baker, who won the Democratic primary with about 44 percent of the vote in a five-person contest, has no Republican opposition in next week's General Election. Included among the honorary co-chairs are four university and college presidents; William Hite, the superintendent of county schools; former governor Parris Glendening, who also served as Prince George's County executive; former county executive Winfield Kelly; three Maryland mayors and three heads of businesses. "This is a great opportunity for a new president and  a new county executive to get to know each other and work collaboratively," said honorary Co-Chair Wallace Loh, the newly appointed president of the University of Maryland, College Park. Transition Committee vice chairs include Howard University Senior Vice President Artis Hampshire Cowan, local elected officials, representatives from police and firefighters' unions and other business leaders. They will lead issue-specific teams slated to meet with county departments and conduct research, Baker said. Honorary co-chairs and vice chairs are volunteers who are not receiving compensation, a Baker spokesman said. 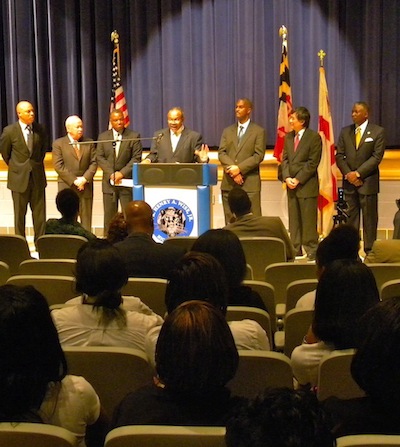 "It really should be a seamless, fluent transition," said Curry, the county's first African-American county executive, who served two consecutive terms from 1994 to 2002, and who is chairing this team. "The executive has identified a broad framework of things we have to do to achieve the great status that we want. We have to make improvements in our schools, we have to be able to create jobs, and we have to grow our tax base to be able to fix the problems we have," said Curry, now a partner at The Murphy Firm. Kenneth Johnson, a Prince George's County native and an assistant general counsel at Sodexo Inc., a food and facilities management services company, will lead the daily operations of the transition team. "My role is to bring great minds together," said Johnson, who is taking a sabbatical from his job at Sodexo to assist Baker. The event was held at Wise High School to symbolize the central role education will play in his administration, Baker said.  "A lot of our job creation is not just in economics, but it's also in our education system," said Baker. "Improving our education system had to be No. 1."