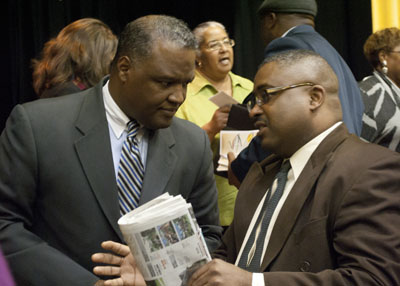 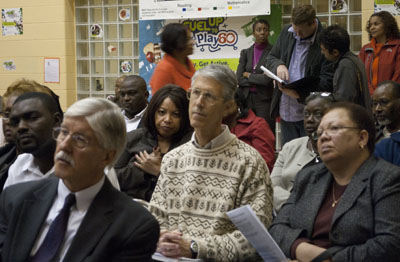 Joe Murchison (center), executive director of Side by Side, listens as community members share their concerns about education. His nonprofit focuses on improving schools in Laurel. (Photos by Maryland Newsline's Tami Le)

Joe Murchison, a Laurel resident and the executive director of the nonprofit Side by Side, said he was worried about the effect recent parent liaison layoffs at county schools would have on the Hispanic community.

"Our Spanish-speaking families, they make up a sizeable number of our families," said Murchison, at the Tuesday night forum at Lake Arbor Elementary School. Census Bureau data from 2009 reveals that persons of Hispanic or Latino origin make up 13.5 percent of the population of Prince George's County. Many of those families don't speak English and need bilingual parent liaisons to help them get involved, Murchison said.

But this February, the county school board approved the layoff of 43 of the 86 parent liaisons who had been serving county schools, said Darell S. Pressley, chief communications officer for Prince George's County Public Schools. The remaining 43 are working at the schools where principles felt there was the greatest need, Pressley said.

Charlotte Underwood was one of the parent liaisons laid off in June. She said parental involvement is extremely important in schools. She said she quit a job five years ago to be active with her son's PTA at G. James Gholson Middle School in Landover.

Other concerns brought up at the forum, attended by Baker and a panel of eight other county elected officials, included teacher quality, classroom size and bullying.

Parent Neena Murphy Martin of Mitchellville said she took her son out of Lake Arbor Elementary School last year because he was being bullied.

"I'm from Kentucky. I didn't grow up worrying about coming to school, and I will not send my son to a school where I have to worry," said Murphy Martin. She said teachers need to better monitor bathrooms where second or third graders share with fifth or sixth graders, which was how her son was bullied.

Although she now has to pay for her son's private school, Murphy Martin said she has to make sure he's safe.

A staffer answering phones at Lake Arbor Elementary School said the school has a new administration this year and that the new principal declined to comment on the episode.

At Berwyn Heights Elementary, "one of the things we're facing ... is increased class sizes," said Patricia Dennison, a Berwyn Heights Council member. Dennison said one of the school's biggest concerns is that the two fifth grade classes each have more than 30 students, in classrooms that are not very big.

Bill Reinhard, spokesman for the Maryland State Department of Education, said that there is no state regulation for classroom sizes but that counties may have their own regulations.

Retired University of Maryland math professor Jerome Dancis addressed student's math skills, which he said have gotten worse over the years. Dancis said he based his analysis on 2006 data from the Maryland Higher Education Commission's Student Outcome and Achievement Report, which showed a growing number of students needing math remediation in college.

"I think that the standards of [teacher] certification are too low," said Dancis.

More than 150 residents attended the listening session, one of three scheduled by Baker, who won the Democratic primary for county executive in September and has no GOP opposition in November's general election.

Baker said he wanted to hear from citizens before trying to set policy.