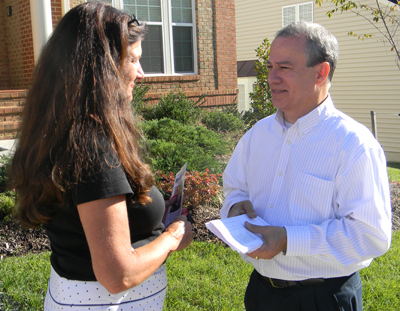 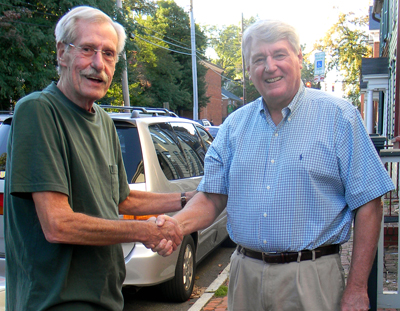 Mike Busch talks about the economy.

ANNAPOLIS - Political observers expect few incumbents - Republicans or Democrats - will be replaced in the state Legislature this November, with Maryland remaining largely untouched by the national anti-incumbency surge.

One sign that the mood has barely seeped into the state is the number of unchallenged returning candidates. Of the 44 senators running for re-election, 25 were unopposed in the primaries, and of that group, 10 will also be unchallenged in the general election.

More than a quarter of House incumbents seeking re-election were unchallenged in the primaries.

"The tidal wave will be little more than a ripple in Maryland," said Paul Herrnson, director of the Center for American Politics and Citizenship.

In last month's primaries, 12 incumbent legislators were replaced by same-party candidates. Political observers expect that to make up most of the change in the General Assembly.

"It does not appear that things are going to change very much," said Matthew Crenson, political science professor at Johns Hopkins University.

There are several possible reasons that big changes are not expected. For one, the more excited base of Republican voters will struggle to make a dent in the General Assembly, where the Democratic majority is 3-to-1.

It's a challenge of numbers. The state has twice as many Democrats as Republicans, making it difficult for the conservative tea party movement to take hold.

Maryland's economy is also faring better than the economies of many other states, meaning voters might be inclined to keep their current legislators, Herrnson said.

That appears to be the case at the governor's level, where recent polls show Gov. Martin O'Malley anywhere from 5 to 11 percentage points ahead of GOP challenger and former Gov. Robert Ehrlich Jr.

O'Malley and Sen. Barbara Mikulski, also a Democrat, banked on incumbent-friendly voters when they rallied with President Obama at Bowie State University this month. Political observers note many other Democratic candidates around the country are distancing themselves from the president this election cycle.

"I've definitely heard it, but it's not prevalent," he said.

Six of 19 Maryland senators challenged in the primaries lost their seats, but Brochin said that isn't a strong indicator of anti-incumbency.

"I don't think you can get that from a primary," because it's the extreme conservatives or extreme liberals who come out to vote anyway, he said. This means primary voters are not necessarily motivated to replace existing legislators, but rather to support candidates who lean far right or left.

Brochin pointed to the Senate race in District 2, where House Minority Whip Christopher Shank defeated Sen. Donald Munson with 57 percent of the vote.

"Shank won because he is more conservative than Munson," and not because Munson was the returning candidate, Brochin said.

But Munson, the only Republican senator to lose a primary race last month, believes anti-incumbency has seeped into Washington County. Pair that with low voter turnout, and the five-term senator, and previously four-term delegate, was ousted.

"Those that did turn out for my opponent were often described as the tea party movement," Munson said. "(Shank) painted me as a moderate, and I'm not. I'm a conservative."

Spring Ward, who teaches state and local government at Hagerstown Community College in Washington County, suspects anti-incumbency had a role in that particular Senate race.

"(Munson) also had a serious challenger, which doesn't happen often in the primaries," Ward said. And she hesitates to say the level of anti-incumbency among Maryland voters is any more or less than the rest of the country.

Munson's neighboring senator to the east, Sen. Alex Mooney, R-Frederick, said he isn't concerned about anti-incumbency, but he has encountered more voters this year than any other who say they simply won't vote for a sitting legislator.

Laslo Boyd of Gonzales Research and Marketing Strategies expects the General Assembly incumbents in Montgomery and Prince George's counties and Baltimore will be safe. In those areas, all 83 Senate and House seats belong to Democrats.

Boyd said the most exciting races will probably be in Brochin's Baltimore County or Anne Arundel County, where several districts are split between the two parties and Republicans could pick up Democratic seats.

He said there's buzz about a possible shakeup in Anne Arundel's District 30, but that's typical of the jurisdiction that's prone to close elections and home to House Speaker Michael Busch, a six-term delegate.

But Boyd doesn't sense anti-incumbency among voters in the district, and he predicts a win for Busch, "but if he would lose, there would be a significant scramble," he said.

Busch said there have been three internal polls indicating the District 30 delegates will return, including Virginia Clagett, a Democrat, and Ron George, a Republican.

But spokesmen for the Maryland and Anne Arundel County Republican Party are both optimistic about their chances to pick up a seat in that district - and possibly oust the House Speaker. Their best opportunity for doing this, based on primary votes alone, is in candidate Herb McMillan.

McMillan gave Sen. John Astle, D-Anne Arundel, a run four years ago, losing by 5.9 percentage points. "I had the most difficult race of my life in 2006," Astle said. Asked if his old opponent has a shot against the House incumbents there, he said, "Anything is possible."

Astle, a four-term senator and a three-term delegate before that, said the anti-incumbency mood exists to some extent, but he believes his long tenure usually helps in elections because voters know what to expect from him.

Anti-incumbency or not, Herrnson said most of the major challenges to existing General Assembly legislators were over with the primaries, particularly in the Senate.

"Winning the primary in most Senate districts is tantamount to winning election," he said.