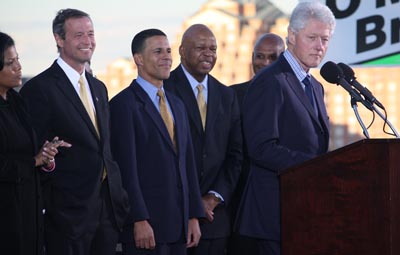 Clinton used a numbers-filled speech that focused on economic recovery to urge voters to really think about the facts in a race he called "The Tale of Two Governors."

"One governor left a deficit; another balanced the books," Clinton said. "If you look at the facts, the Tale of Two Governors leads you to an inevitable conclusion: I think I'll keep Martin O'Malley and Anthony Brown."

President Obama also campaigned for the governor this month at Bowie State University, but a recent Gallup poll shows that Clinton has a greater net effect on voters, especially independents and Republicans.

"Obama's a live target," said Matthew Crenson, a professor emeritus of political science at Johns Hopkins University. "Clinton's bathed in nostalgia. Clinton was always the passionate president, the one who showed his emotions in public."

But Clinton stuck to facts and figures Thursday - the day before the beginning of early voting - showing the results of the daily hour he says he spends studying the economy. The former president told attendees the United States has recovered 70 percent of the income lost during the recession, compared to Germany's 60 percent and Great Britain's 30 percent.

Clinton also highlighted some of the top rankings Maryland has earned recently for public schools, an entrepreneur-friendly business climate, and preparation to take advantage of a green economy.

"Why would anybody think about making a change?" he asked.

But a poll released this week by Gonzales Research and Marketing Strategies shows 42 percent do want change - and support the Republican challenger, former Gov. Bob Ehrlich. O'Malley garnered 47 percent in the same poll.

Pollsters estimate African-American turnout will drop from 60 percent in the 2008 election to 36 percent in 2010, Clinton said. Younger voters could see a drop in turnout of 25 percentage points. Political analysts hypothesize that low voter turnout could sway the election toward Ehrlich.

"You have a governor who froze college tuition," Clinton said. "How can you stay at home? You are tomorrow's America, and you need to show up in 2010."

Obama appealed to the same demographic - young voters - and to African-Americans, but he did so with an approach that was less lecture and more pep rally.

Both presidents campaigned in jurisdictions with high concentrations of African-Americans - Prince George's County and Baltimore - areas that make up a significant chunk of O'Malley's base.

"It's absolutely essential for O'Malley to get African-Americans to turn out," Crenson said.

Clinton, however, encourages 21 percent of independents to vote for a candidate and dissuades 23 percent.

"It's obviously a good sign for us," Ehrlich said. "(O'Malley) is calling the presidents in, doing anything he can to hold onto power."

It's not desperation, Crenson said, but the governor is trying to get every vote he can, and Clinton is a more effective weapon now than Obama.

"[O'Malley] wants to secure his apparent lead, so he brings out his big guns," Crenson said. "It underlines the fact that Ehrlich can't bring out the last Republican president [George W. Bush]. It would send him plummeting down in the polls."

Baltimore residents who attended the rally said they came to hear the "eloquent," "charismatic" and "humanitarian" former president who is associated with a vibrant economy.

"[Clinton] has been around," said Baltimore resident Dennis Milbourne. "It's not necessarily about more experience but more credibility."