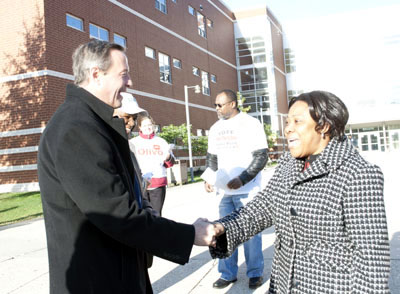 Gov. Martin O'Malley shakes hands early on election day with Rossy Nwachukwu, a registered nurse from Bowie, who was eager to meet the governor for the first time. "I'm excited because … all along I've been seeing him in the picture, but now I saw him in … person," said Nwachukwu, at Charles Herbert Flowers High School in Springdale. (Maryland Newsline photo by Tami Le; more photos from General Election Day and night in slide shows.)

BALTIMORE - An energetic campaign and substantial Democratic turnout boosted Gov. Martin O'Malley to a resounding repeat victory over former Gov. Bob Ehrlich on Tuesday in a race that bucked national trends and was nowhere near as close as many thought it might be.

O'Malley, who defeated Ehrlich by 6 percentage points in 2006, enjoyed large margins in the Washington suburbs and Baltimore, two areas key to his re-election bid.

With 79 percent of the vote in, O'Malley led Ehrlich 55 to 43 percent. The Washington Post and others called the race for O'Malley.

By the time O'Malley took the stage at Baltimore's American Visionary Arts Museum, the crowd, already buoyed by Baltimore Mayor Stephanie Rawlings-Blake's dance moves and a rousing thank you from Lt. Gov. Anthony Brown, was ready to give the governor a rock star-worthy welcome.

"This is a very, very humbling honor," O'Malley said. "I want to thank Marylanders for their resilience, their hope, their belief in the future."

In an anti-incumbent year, O'Malley took nothing for granted. He outspent and out-campaigned his opponent, airing television and radio ads in the Washington and Baltimore markets, zigzagging across the state in an RV, and trotting out heavy-hitters like President Obama and former President Clinton.

But there wasn't much anti-incumbent sentiment to combat in Maryland, analysts said.

A large African-American population mitigates criticism of Obama, said Adam Hoffman, a political science professor at Salisbury University. Both a state economy that's performing better than most, and a high concentration of federal employees who won't buy into anti-government messages contributed to the near-immunity Maryland's elected officials enjoyed this year.

The crowd at the Timonium Fair Grounds booed when Ehrlich conceded.

"Tonight it's at an end. We wish him well and we wish the state well," the former governor said.

When he looked ahead Ehrlich talked about radio appearances with his wife Kendel Ehrlich and of going to his son's football games. He also acknowledged the uphill climb he faced as a Republican in Maryland.

"Being a Republican in Maryland means it's tough," he said. "We live to fight another day."


View in a larger map

The campaign looked to be a closer contest this summer, but O'Malley's lead grew steadily in fall polls. The governor seized the opportunity in this unusual race to paint his opponent as the incumbent, using a series of negative ads to remind Marylanders of increases in college tuition and fees levied under the Ehrlich administration.

O'Malley also tied himself to the president, saying Obama saved the country from the second Great Depression and praising the president's courage in pushing for health care reform. It might not have worked in other parts of the country, but it worked in Maryland, where Obama enjoys a 52 percent approval rating, according to an October poll by Gonzales Research and Marketing Strategies.

And in a state where registered Democrats outnumber Republicans more than 2-to-1, Ehrlich couldn't overcome O'Malley's charges to convince enough independents and moderate Democrats that he deserved a second chance in the governor's mansion.

"I feel as though these last four years have been better than the four years before that," said Doris Wright, 70, who voted for O'Malley in Anne Arundel County. "Under Ehrlich taxes were raised too high. (O'Malley) didn't cripple us as much as Ehrlich did."

For Nushi Carrera, 51, taxes were key to her decision to vote for Ehrlich.

"I just feel that our taxes have gone up significantly," said the Anne Arundel County resident. "(Ehrlich) has already set precedents, and he's financially conservative."

The majority of voters cited jobs and the economy as the most important issues, according to the Gonzales poll, and the campaigns reflected this. O'Malley touted the creation of new jobs during his tenure and the potential for more through Base Realignment and Closure decisions and in the technology sector.

Ehrlich campaigned on improving the business climate to lure companies, and thus jobs, back to the state.

Jobs, the state's budget deficit, education and immigration headlined the contest's three debates -- two television, one radio -- that let the governor show off his polish and reiterate campaign talking points. But the debates also turned nasty, reminding Marylanders that their last two governors really don't like each other.

Ehrlich used the second and third debates to hammer away at the policy differences between the two candidates, but he never gave the bombshell performance analysts said he needed to shift the momentum of the race in his favor.

"He needs to spell out for people why they need to vote the current governor out of office, why he and not O'Malley is the right person," said Richard J. Cross III, an independent public relations consultant and a former Ehrlich speechwriter. 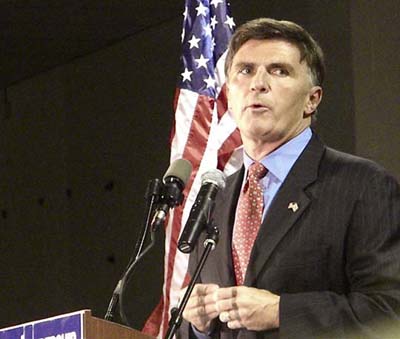 Former governor Robert Ehrlich expresses his disappointment at losing to Gov. Martin O'Malley, saying on election night, "I love to win, and I love to compete, but this is politics, and this is Maryland, and being a Republican in Maryland is tough." (Maryland Newsline photo by Rabiah Alicia Burks)

"They're actually similar," Resing, 49, said. "They're both pro-gambling, Intercounty Connector. They just seem similar on many issues."

But Ehrlich separated himself from O'Malley and took some controversial positions, such as not funding the geographic cost of education index, which would provide additional education funding for Montgomery and Prince George's counties and Baltimore, among others, and using a rapid bus system for the Purple Line.

"In PG County, education is a big issue," said Martina Lutz, an elementary school teacher. "Teachers are getting furloughed, and with salary cuts, I can't put more money into the economy."

Ultimately, Ehrlich fell victim to a louder and more organized O'Malley campaign that allowed the governor to escape blame for the economic recession that fell on the shoulders of elected officials across the country.

"I think (O'Malley's) doing a good job, and I want to give him another chance," said Mary Lou Reidy, a data analyst from Frederick County. "It's not his fault we lost jobs and the economy's in the tank."