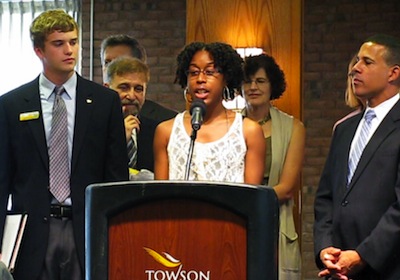 Graduate student Tamisha Jackson, 22, speaks at a rally to mark the introduction of a new health care provision that allows those under 26 to be on their parents' health care plans. Also at the podium are (from left) Student Government Association Treasurer Darryl Glotfelty, Maryland Citizens' Health Initiative President Vincent DeMarco, Maryland Secretary of Health and Mental Hygiene John Colmers, Dowell Health Center Director Jane Halpern, Vice President for Student Affairs Deb Moriarty and Lt. Gov. Anthony Brown. (CNS Photo by Alix Farr)
WASHINGTON - When Tamisha Jackson got a letter from her health insurer informing her that she would no longer have coverage after she turned 22 last November, the Towson University graduate student immediately began to research individual plans.

What she found, she couldn't afford, so she opted out of health insurance altogether.

But when the health care reform bill was signed on March 23, Jackson and thousands of other young adults found relief.

"When I found out that I could actually be put back on my father's plan, I was just happy," Jackson told school officials and others celebrating at Towson University six months later, the effective date for young adults to get back on their parent's health care plans under the new law.

More than 18,000 youth from Maryland alone fall under this new provision, according to the U.S. Department of Health and Human Services. But it is only a small part of the massive and controversial health care reform law that continues to fire election debate across the country.

Even as the first of its provisions are coming into effect, the health care law's future remains uncertain. Reforming or reversing it has become a rallying cry nationwide by mostly GOP candidates, who are expected to win elections in droves this year.

It's a complicated law. There are provisions to provide free preventative care, reduce and control the costs of premiums through competition among health care providers, eliminate lifetime and yearly coverage limits, expand Medicaid and provide tax credits for small businesses providing insurance to employees.

The reforms are expected to reduce the federal budget deficit by more than $100 billion over the next 10 years, according to healthcare.gov. In Maryland, the Health Care Reform Coordinating Council estimates that by fiscal year 2020, the state will save $829 million, according to its interim report.

But conservative candidates and party leaders are skeptical of the promises that the law will save any money at all.

Groups of tea party activists, part of an anti-tax, government reform movement sweeping the country, have been passionate in their disapproval of the bill. The Contract From America, a conservative pledge that candidates from all political parties have been encouraged to sign, was crafted by tea party believers and includes the call to repeal the health care legislation.

The GOP's Pledge to America, a proposed agenda for Republicans should they gain a majority in Congress, says, "The new health care law includes $569.2 billion in tax increases -- including taxes that will directly increase the cost of health care goods and services -- and $528.5 billion in Medicare cuts, which will be used to create new programs not related to seniors."

The document goes on to complain that "because the new health care law kills jobs, raises taxes, and increases the cost of health care, we will immediately take action to repeal this law."

Even in heavily Democratic Maryland, candidates have taken up the cause of repeal.

"The current legislation does not solve the problem," said the tea party-backed Charles Lollar who is running in the 5th Congressional District against House Majority Leader Steny Hoyer, D-Mechanicsville. "It does not focus on the issue of cost."

Lollar said that, if elected, he would push for competition between health care plans across state lines.

"It's as simple as the McDonald's model and the Dollar Value Menu," he said. "You can get a lunch for $3 now.

Competition in the market drove those costs down. The same thing can absolutely happen with our health care issue."

Hoyer, who has been a leading advocate for health care reform, says the new law will help Americans "tackle rising health care costs and help (them) access quality."

"According to nonpartisan experts respected by both Democrats and Republicans, health reform will cut the deficit and it does slow the rate of growth in costs," he said.

Officials lauding the success of the law are begging skeptics to give it time to work and for the real benefits to make an impact. Even the law's most vocal proponents are admitting that this is not yet a cure-all for what most Americans would say is a flawed health care system.

"All the polls you see show that the nation is pretty divided down the middle about whether health care reform is something they support or something that should be repealed," said Terry Gardiner, the national policy director of the Small Business Majority. "For those people that support it, this is going to be implemented over many years; it's not an instant result. You have to realize that and you have to maintain your support for health care reform."

Sen. Barbara Mikulski, D-Md., a supporter of the reform law who is up for re-election, said that the law allows for reduced costs not only for the state, but also for many individuals. By 2014, up to 834,000 residents of Maryland will qualify for premium tax credits to help them pay for coverage, according to Mikulski.

But conservatives worry that having the government get between the patient and the doctor on any occasion is not good for the cost or the quality of care.

"The government ought to keep its nose out of the free enterprise system," said Eric Wargotz, Mikulski's Republican opponent.

Wargotz, a practicing physician, also said the problem of cost has not been adequately addressed and is pushing his plan to leave the new law unfunded.

"My hope is that by doing so, it will force the subject back to the table," he said. "The current bill does not address costs."

Wargotz said he has a four-part plan for a new health care bill that, like Lollar's, includes interstate competition, as well as the ability to keep plans when employees change jobs, "meaningful" tort reform, and the creation of incentives for residents to take advantage of tax-free health savings accounts.

How much do you know about the new health care law? » online exam

There is also the danger that the new plan will only attract people with substantial health risks, which would in turn drive up costs.

"You have to get young people into coverage," said Dr. Rex Cowdry, the executive director of the Maryland Health Care Commission. Only when everyone buys a plan will costs truly go down, he said, but designers of the plans worry that healthy younger residents will opt out and just pay a penalty.

"It's not a silver bullet," said Democratic Lt. Gov. Anthony Brown, who is also up for re-election, at the Towson event. "But it's a step in the right direction."

"While the health care reform law did not achieve everything I hoped for," Mikulski said in a statement. "I am proud of what we were able to accomplish."

No matter how complicated or controversial the health care debate becomes, young people around the country, including Tamisha Jackson, will continue to praise the new benefits they have received.

"Finding a job that can cover your health benefits as you were on your parents' plan was not possible," she said. The recession, she said, has been particularly difficult on recent college graduates.

Although she still must wait until January 2011 to be officially covered because of her insurance company's negotiating period requirement, she said she is relieved. And she especially feels lucky because she has not had any health problems since being dropped from coverage last November.