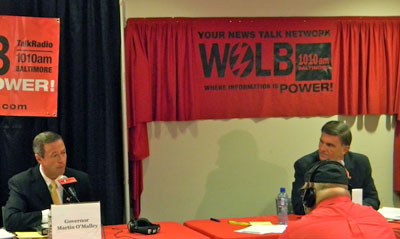 In the midst of the policy debate, the candidates barely looked at one another, instead exchanging "that's not true" jabs and a comment by Ehrlich that O'Malley will soon be looking for a job in the private sector.

Reprising his role from the second debate as aggressor, Ehrlich said President Obama's signature piece of legislation moves the country toward Canadian and European systems of health care and does not contain necessary tort revisions that would cut back malpractice lawsuits.

Ehrlich, who held a press conference Wednesday on the national health care reform bill, does support sections of it, such as the tax credit for small businesses, and said a bipartisan group of federal legislators could sit down and write a bill that reforms health care in a way that preserves individual freedom.

O'Malley, speaking to his base via a radio station whose audience is mostly African-American, lauded the president for the bill's success and said he will do everything possible to make Maryland "a leader in health care for all."

"I want to move forward to the day when every person is able to bring their child to the doctor when they fall ill," the governor said.

Though he primarily stuck to his campaign talking points, O'Malley did tout a significant increase in insurance coverage for poor Marylanders and in health services for returning veterans during his term as governor.

The candidates agreed on offering a tax exemption on veterans' retirement benefits. O'Malley said Lt. Gov. Anthony Brown, with his military background, advised that the governor should fund mental health services for veterans before implementing a tax exemption, if the state's budget allowed for only one of the two options.

Young also questioned the governor on the arrests of large numbers of African-American men while he was mayor of Baltimore, which O'Malley defended with a description of his three-pronged strategy that he said shuttered "open-air drug markets" and drove down violent crime in the city.

Both Ehrlich and O'Malley boasted about their engagement with the African-American community, about investments in historically black colleges and universities and about their work on behalf of minority-owned businesses during their respective tenures in the governor's office.

Ehrlich said he appointed 12 African-American judges, including the first on the Eastern Shore. He said African-Americans would be well represented in the congressional redistricting process that will take place in 2012. O'Malley said he doubled the number of African-American judges and cited Ehrlich's "F" rating by the NAACP during the former governor's time in the House of Representatives.

Saying "our diversity is our strength," O'Malley pointed out that he increased state procurement dollars to minority-owned businesses, and froze tuition at state colleges and universities, which helped raise graduation rates.

The two did agree on funding arts districts in Baltimore County.