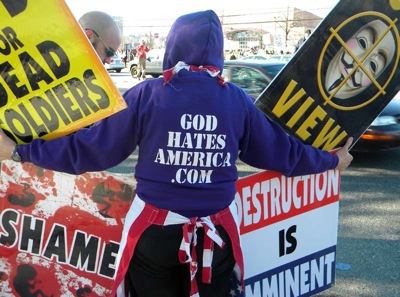 HYATTSVILLE, Md. – On one side of the road in front of Northwestern High School, about 200 area residents and students waved signs pleading for tolerance and peace, singing “God Bless America.”

The scene was different across Adelphi Road, where five picketers from the Westboro Baptist Church held aloft signs with gay slurs and sang tunes to popular songs, changing the lyrics to decry homosexuality. The anti-gay church from Kansas - known for picketing the funerals of American soldiers who they say die because the country tolerates homosexuality - targeted Northwestern High School because spokesmen said the state is “in a lot of trouble.” They stood across the road from the school from 9 a.m. to 9:30 a.m., as students were arriving for classes.

The state’s schools are “teaching courses on rebellion” by implying that homosexuality, abortion and fornication are acceptable, said Shirley Phelps-Roper, 53, a church member and daughter of the church’s founder.

“Wisdom is crying aloud in your streets,” said her daughter, Megan Phelps-Roper. The group sang and shouted while passersby honked their horns, flashed peace signs out car windows and slowed to gawk at the crowd.

Each church member held at least one sign in each hand. One sign read, “Thank God for dead soldiers.”

Counterprotesters arrived around 8 a.m. to set up and prepare for the church group’s arrival. Hyattsville City Council member Tim Hunt, 38, helped organize a sign-making party the night before.

“When people come to your town and say they think they’re better, the only thing to do is say, ‘No, I don’t believe that,’ ” Hunt said Tuesday morning.

Counterprotesters held signs saying, “We’re for separation of church and hate,” “All visitors respected,” and “We are all Northwestern.”

Local police and school security forces stood by, ready to maintain order should the event escalate beyond verbal protest.

Prince George’s County Public Schools spokeswoman Lynn McCawley said officials at the school were trying to make the day as normal as possible for students, who were told to go directly into the building and to class.

“The principal encouraged students to give this as little face-to-face attention as possible,” McCawley said.

Still, some students arrived before the first bell at 9:30 a.m. to take part in the counterprotest. “Gay and bisexual people and everyone else are coming together as one,” said London Merriman, 16.

Merriman and her friends said they would be in class when the bell for first period rang.

Amber Waller, a Prince George’s County School Board member representing District 3, said she was glad some students showed up to have their voices heard and said members of the school PTA were on hand to “support students” and make sure they went to class.

Waller was even more pleased that so many people from the community were there, in her view, to defend the school and its students.

“I just want these people (the church cohort) to get back on their bus and get back to Kansas,” said Linda Mahoney, state president of Maryland’s chapter of the National Organization for Women.

Nicole Lucier, who helped organize residents of neighboring University Park for the counterprotest and created a Facebook event for it, said the counterprotest “was a great overall representation of the community.” She added, “Love and respect for self and community is the main message."

Phelps-Roper said the number of people standing in opposition to the church’s message did not faze her or the group she came with, including 25-year-old Megan Phelps-Roper, the oldest of her 11 children.

“There is not any consistency in their message,” Shirley Phelps-Roper said of the counterprotesters. “Their moral compasses have been broken.

The Westboro church is embroiled in a lawsuit that has been appealed all the way to the U.S. Supreme Court. The high court is reviewing a case in which Albert Snyder, the father of a fallen soldier from Carroll County, sued Fred W. Phelps Sr., the church’s founder, for invasion of privacy, civil conspiracy and intentionally inflicting emotional distress at his son’s funeral, according to court documents.

Shortly after 9:30 a.m. Tuesday, all five Westboro Baptist Church members quickly packed their signs, boarded a silver minivan and drove away without incident. Many counterprotesters stayed until about 9:50 a.m., when a school security officer asked the group to leave because students in the school were looking out windows, distracted.

Lt. Wayne McCully, University Park assistant police chief, said his department collaborated with Hyattsville, Prince George’s County police and school security forces to control the crowd. McCully’s only focus was public safety, he said, and to enable protesters on either side of the street to do “what the (U.S.) Constitution allows them to.”

Phelps-Roper said she and her cohort stopped at Northwestern on their way to the FBI Academy in Quantico, Va., where she said they were speaking about First Amendment rights.

FBI supervisory special agent Andrew Bringuel, an instructor in the behavioral science unit at the FBI National Academy, confirmed the group was speaking with professional law enforcement officers in his class on Tuesday. Bringuel said groups like the church are invited so his students can understand their orientation.