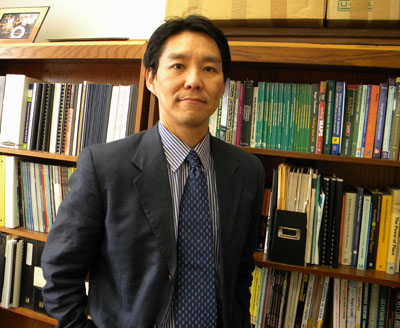 COLLEGE PARK, Md. - When Hiroyuki Iseki, a native of Kobe, Japan, read the news of the March 11 earthquake and tsunami in Sendai, he initially didn't see it touching him personally.

“My family and friends were safe,” said Iseki, an assistant professor of urban studies and planning at the University of Maryland School of Architecture, Planning and Preservation. “I talked to them immediately, and they were fine,” he said. “That was my initial reaction.”

But hours later, Iseki’s personal stake in the catastrophe grew: He received a call from an old friend and colleague offering an opportunity to use his expertise in geographic information systems to help those in his home country.

Yoh Kawano, campus GIS coordinator at the University of California, Los Angeles, told Iseki he was working with two organizations, GISCorps and Crisis Commons, to create datasets to support the crisis response.

Kawano asked Iseki if he would be willing to get on board.

“He [Iseki] is one of my best friends; he’s also from Japan,” said Kawano of the man he befriended when the two were graduate students in urban planning at UCLA. “He had all of the skills to help me.”

Iseki seized the opportunity. “I was very fortunate to do something for my country,” he said.

Tools such as a recovery map help bring all these layers together, she said.

Kawano and Iseki joined five other GIS specialists to create “common operational datasets.” An interactive map would follow, providing a simple visualization of a portion of this data, which includes locations of evacuation shelters, flooded areas, public telephones and cell phone charging stations.

Iseki said the team collaborated mainly via Skype, e-mail and Google Groups to share information, since members were spread out across multiple locations – including Maryland, California, Arizona, Switzerland and Australia.

Then came the challenge of translating the data, a lot of which was in Japanese.

Though Kawano spoke the language, Iseki’s fluency in written Japanese turned out to be an asset over the course of the project.

Now 43, Iseki studied at the University of California, Berkeley, as an exchange student at the age of 23, but moved back to Japan. He settled permanently in the U.S. when he came to UCLA for graduate school at the age of 29.

“They needed people who were bilingual,” Iseki said. “I was the only one who grew up in Japan, of the seven volunteers.”

The process was stressful. Iseki said he worked for about 35 hours over eight days to help compile data, and was awake as late as 4 a.m. some nights.

“And that was in addition to my job here [at Maryland],” he said.

The map is crowdsourced, meaning anyone with a link to an online form can submit new information via a smartphone or computer. This information is then entered into a Google Document and added to the map.

“The data is actually collected by people in the field,” Iseki said.

Blanchard said it is difficult to gauge the ultimate effectiveness of the recovery map.

But she sees this project as an experiment, and expects that Crisis Commons will apply what was learned to provide the United Nations with recommendations for future disasters.

Iseki said he has not yet told his family in Japan about his contributions to the project, but that his fiancée, who is also Japanese, is happy about the work he’s doing.

Although the GIS team faced challenges, both Blanchard and Iseki hope that open data will be used more often to deal with disasters in the future.

“We’ll probably never see the people who submit the information,” Iseki said. “But we’re all working towards the same purpose. Everything is the outcome of a collective effort.”