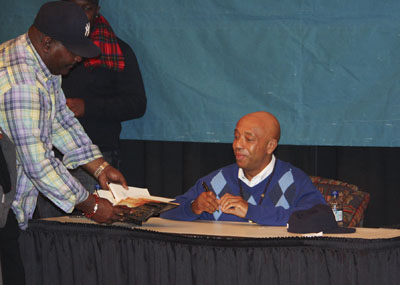 Russell Simmons prepares to sign copies of his new book, "Super RIch," at the University of Baltimore. (Photo by Maryland Newslines Alexandra Wilding)

Simmons' Profile from PBS' 'They Made America' Series

Find Your Passion to Be Successful, Hip-Hop Legend Tells Students

BALTIMORE - It is not surprising that hip-hop legend and entrepreneur Russell Simmons, named by USA Today as one of the 25 most influential people of the past 25 years, would write a book called “Super Rich: A Guide to Having It All.”

What is surprising is that he says the book isn’t about how to make gobs of money. Instead, Simmons says, it’s about finding inner wealth through pursuing personal passions.

Simmons, co-founder of Def Jam Records, instrumental in bringing hip-hop to the mainstream, brought the message of his new book to a packed crowd at the University of Baltimore’s Langsdale Library Thursday night.

“I think everyone needs to find a passion. The discussion today is how can we find and create passion?” Simmons said.

A longtime practitioner of meditation and yoga, Simmons wove spiritual beliefs and practices throughout the hour-long conversation.

“People keep digging a hole until they find a rock. You’ve got to get past the rock,” he said. “It’s about how you do the work. Greediness causes suffering.”

During a question-and-answer session, one student in the audience asked Simmons how to take financial risks during hard economic times punctuated with mounting student loans.

“We have a lot of problems … but people have had much worse situations than you, and they built empires out of nothing,” Simmons said.

More than 400 people attended the event, including students from the University of Baltimore, middle and high school students from area schools, and community members.

Before the dialogue began, Brian Sessions, 20, shared his excitement about hearing from Simmons. “I’m looking forward to more advice about how to get closer to my goals and passions,” Sessions said.

A junior from Baltimore majoring in entrepreneurship at the University of Baltimore, Sessions said he already has two photography companies. “I want to compare his passion to mine,” he said.

But Simmons’ career path wasn’t obvious when he was young.

Before starting his hip-hop label, Simmons was headed down a road of crime and violence. Raised in a rough part of New York City’s Queens borough, Simmons said he started selling drugs when he was young, and eventually joined a gang.

“The young people who were on that path with me are mostly dead or in jail,” Simmons said in a message he specifically directed toward the youth in attendance.

Ultimately, it was music that changed the course of Simmons’ life. He worked as a promoter, managing artists and organizing concerts, as well as a producer.

Hip-hop "became the whole focus of my life. I wanted to produce it, promote it, and I dedicated my life to it,” he said. 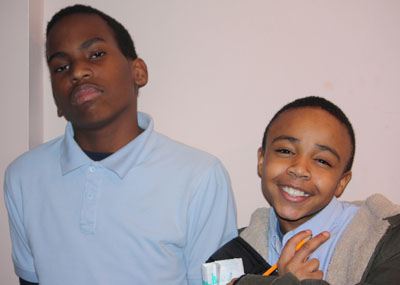 Charles Lucus, 12 (left) and Jordan Sturdavant, 12, of Baltimore wait in line to get their books signed by Russell Simmons. (Photo by Alexandra Wilding)

Leslie Joyce, assistant director of development in the Merrick School of Business, said Simmons’ message was well received because his background isn’t so different from those of some students entering the university. “Many of our students are first-generation college students, and students working to support their families,” she said.

The Merrick School of Business speaker series started in April 2009 to bring more business leaders to the University of Baltimore’s campus, said Joyce.

After Simmons’ appearance, Baltimore student Charles Lucas, 12, waited in a lengthy line to get his copy of “Super Rich” signed by Simmons. Lucas said Simmons is a good role model for youth.

“I think it was educating for young people to learn about being successful,” Lucas said.

Perhaps the most important advice Simmons gave to all the aspiring entrepreneurs in the audience was something he said toward the end of the night.

“You have to be dedicated, have resilience and faith,” he said.  “You can never fail, unless you quit.”