Capital News Service tracks the tracker: Patrick O'Brien, hired by the Maryland Democratic Party to capture footage of Republican gubernatorial nomineee Robert Ehrlich Jr. This was captured at a stop at Addie's restaurant in Rockville. (CNS Video by Shannon Hoffman)

ANNAPOLIS - If Gov. Martin O'Malley or former governor Bob Ehrlich slips up on the campaign trail, they better hope Ralph Kettell and Patrick O'Brien aren't around.

As a campaign tracker employed by the Maryland GOP, Kettell follows O'Malley with a video camera, recording his conversations with voters, staff and the press.

O'Brien, who works for the Maryland Democratic Party, does the same with Ehrlich.

Spokesmen for both parties said trackers allow the parties to hold the opposition accountable for inconsistencies in campaign messages. They're fast becoming a fixture in political campaigns from Connecticut and Minnesota to Nevada and California, generating news when they catch a mild "gotcha" moment on film or when a candidate complains about being followed.

"This is our way of trying to keep (Ehrlich) honest," said Isaac Salazar, the communications director for the Maryland Democratic Party. "We want to know what he's telling different constituencies."

"The governor's full of cliches, and it's good for Marylanders to see that," said Kettell, a 23-year-old from Burtonsville who went to Colby College.

While there certainly are ideological differences, the relationships between the trackers and the campaigns are not hostile. The attitude leans more toward resigned acceptance mixed with bouts of frustration.

Ehrlich called O'Brien a "nice kid" and said his campaign was going to buy O'Brien, a southern Maryland native who graduated from Bates College in 2009, a Starbucks gift card to keep him awake during all the events he attends.

Republican candidates and their campaigns make an effort to be friendly to Democratic trackers, Mahoney said.

"I'll go up and say hi, ask if he's getting good stuff," Mahoney said. "We're not going to be hostile to them."

After a speech Ehrlich made to the Maryland State Builders Association in mid-September, he jokingly chastised O'Brien, who shoved a small video camera in front of the former governor, for being late. Ehrlich tried to shake O'Brien when he left the press gaggle to speak with someone privately, but the tracker stayed in pursuit. 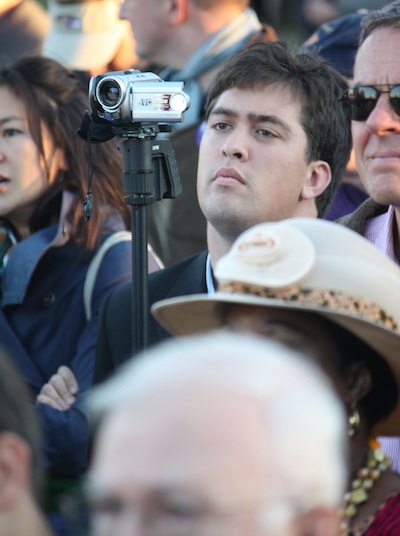 Ralph Kettell, the tracker hired by the Maryland GOP to capture footage of Democratic Gov. Martin O'Malley, records from the crowd at a recent campaign event in Baltimore. (CNS Photo by Shannon Hoffman)

When events take place at private venues, though, the campaigns can have an owner or manager escort trackers out of the event. O'Brien was forced to leave a press conference at Addie's restaurant in Rockville in mid-October. He said Ehrlich's team is usually polite but has become "pushier as it gets closer to Election Day."

Kettell, who has been following the governor since July, said O'Malley's team is "reasonable," but has "crossed the bounds sometimes," including early on in the campaign when he says the State Police tried to remove him from a Board of Public Works meeting.

"I haven't made a ruckus," Kettell said. "The governor's office is an esteemed position."

After an Oct. 21 radio debate in Baltimore, Kettell was filming when O'Malley stopped to answer questions as he left the studio. O'Malley spokesman Rick Abbruzzese acted as a screen, mirroring Kettell's movements to block his camera angle.

The treasure of trackers is to catch a candidate in a "macaca moment," named for the 2006 gaffe that brought down former Sen. George Allen in Virginia. Allen referred to an Indian-American tracker from Democratic opponent Jim Webb's campaign as "macaca," which is sometimes considered a racial slur.

Allen, who was expected to win re-election and possibly vie for the 2008 Republican presidential nomination, then lost to Webb by about 7,000 votes, or 0.3 percent of ballots cast.

It is well-documented that trackers - hoping for a slip like Allen's - are hovering around their assigned candidates, Republican and Democratic, in gubernatorial, House and Senate races nationwide. Some candidates maintain cordial relationships with their trackers, while others are more antagonistic.

In Nevada, a tracker appeared at a campaign event for Democratic Rep. Dina Titus, the Los Angeles Times reported, and asked Titus on camera if she would vote to keep Rep. Nancy Pelosi as speaker of the House. Titus didn't answer, and the tracker ran off -- with footage showing just that.

A tracker in Ohio's 15th district filmed Democratic Rep. Mary Jo Kilroy saying she voted "no" on a government bailout, the Columbus Post-Dispatch wrote. The clip made it to YouTube, and Republican challenger Steve Stivers said Kilroy was lying because she hadn't taken office when the bailout was approved in fall 2008.

Kilroy was talking about another bailout vote the following year, her campaign told the newspaper.

Republican National Committee Chairman Michael Steele had to answer for calling the war in Iraq "a war of Obama's choosing" when he was filmed by a Democratic tracker at a summer fundraiser.

The Democratic National Committee encourages trackers and volunteers nationwide to upload footage of Republican candidates to The Accountability Project, a website used to collect audio and video from Republicans' public appearances.

Since its launch this summer, the site says it has aimed to make "candidates see that there's a cost to their dishonesty."

O'Brien said he doesn't upload his film clips to the site.