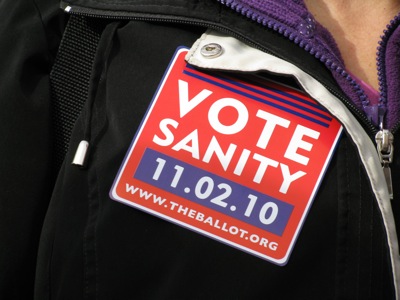 COLLEGE PARK, Md. - Get-out-the-vote organizations like Rock the Vote are experimenting this year with social media innovations that will serve as a test run for the 2012 presidential elections -- especially as a way to reach out to the youth vote.

Rock the Vote, teaming with Google, the Pew Research Center and others, recently came up with a way to track where people vote by having them “check in” online on Foursquare to indicate their polling station. Those who do so receive an “I Voted” badge on Foursquare, a social media forum where users can find out other users’ locations and give their own. The data for this voting information project shows up on a map so users can see where other people have voted and when, although not with individuals’ names attached.

“Location data is an important social media tool that is currently in early-adopter phase, but that will likely play a major role in 2012,” said Rock the Vote spokeswoman Maegan Carberry. “We're excited to see how it comes together in 2010 and learn from that going forward.”

Mindy Finn, a partner at the D.C.-based company Engage which is working with Foursquare, said they're looking to see if the “bandwagon effect” will help to increase voter turnout. “When someone checks in [on Foursquare], many people push that to Facebook and Twitter,” she said, explaining how information shared on one social media network can spread to others.

The tools could carry increased importance, as at least one national poll seems to indicate enthusiasm among young voters has waned. The Harvard Institute of Politics released a national poll last week of 18- to 24- year-olds. The poll, conducted Sept. 24 to Oct. 4, showed that while enthusiasm normally tends to ramp up as an election draws nearer, the percentage of millennials who say they will “definitely” vote in this election has fallen over the past 11 months, from 36 percent to 27 percent.

In addition, those who said they were politically active or engaged also dipped, from 24 percent who answered positively in November 2009 and February 2010 polls to 18 percent.

Politico and Facebook sponsored a panel discussion Oct. 25 at George Washington University to discuss the ways campaigns are using social media in the midterm elections. “Very few congressional candidates are doing a good job using these tools,” said panelist Matthew Hindman, an assistant professor of media and public affairs at GWU. “The most important thing in these social media is that they have to be updated constantly, and so many candidates just use them as window dressing.”

Finn, a panelist, noted that in 2008, generally only candidates who wanted to reach young voters used social media. “Now, in 2009, and particularly in 2010, it’s just the default. As a candidate or campaign you have to have a Facebook profile,” she said.

In 2008, online tools played a role in Barack Obama’s successful run for the presidency. The Washington Post reported after he won the election that Obama had raised more than $500 million online, most of it in small donations. Political analysts observed that Obama had far more Facebook friends and Twitter followers than Republican nominee John McCain.

Campaigns continue to use Twitter and Facebook, but some are doubtful of their effectiveness in delivering votes on Election Day. “I don’t believe that Facebook can win an election,” said Jake Weissmann, the 25-year-old president of Young Democrats of Maryland. Weissmann said he does find Facebook useful for organizing volunteers and reminding people about early voting.

One Facebook application that is generating a lot of interest (and opposition) is Obama’s “Commit to Vote” challenge, which lets users share why they’re voting by posting on their friends’ walls. Bloggers who say that the application collects an invasive amount of private information are spreading the word about blocking and avoiding it.

Facebook was also used to get out the word about two big rallies Oct. 30 in Washington, D.C., hosted by comedians Jon Stewart and Stephen Colbert. The largest Facebook event pages for the “Rally to Restore Sanity” and the “March to Keep Fear Alive” had reached 224,492 and 91,585 members respectively two days before the event, although smaller spin-off groups exist.

“Rock the Vote works with many organizations to get out the vote, and Comedy Central is an entertainment network that young people watch,” Carberry said, about the natural synergy between the two. Rock the Vote wants to encourage young people to show up on Election Day.

“We want to connect with them at an event they are interested in, just as we attend Ohio State football games and Lady Gaga concerts,” Carberry said.

Old-fashioned star power never dies as a get-out-the-vote tactic. But is it effective?

“It obviously helps when someone like Jay-Z comes out and talks about enfranchisement,” said Dan Hochman, 21, a senior at Johns Hopkins University. “But in the end, they can’t drag you to the polls. You have to feel something.”

When it comes to more practical matters like voter registration, Rock the Vote has an online tool that it’s used since 2004, updating and redeveloping it every election cycle. It seems to be working.

“In 2006, we registered 50,000 young people, and this cycle we're at almost 300,000 registrations in person or via our downloadable tool online,” Carberry said.