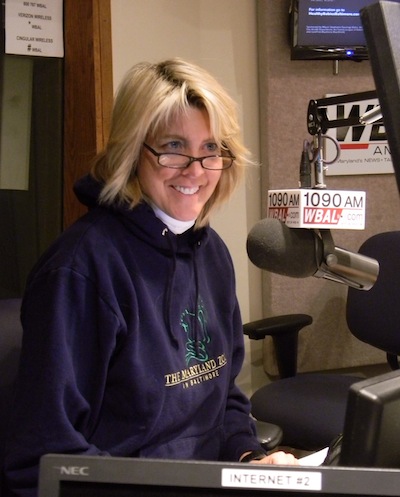 Kendel Ehrlich pauses during a commercial break of a recent episode of her show on WBAL. (CNS Photo by Shannon Hoffman)

ANNAPOLIS - It was election night, and the losing candidate for governor devoted several minutes of his concession speech to the woman standing behind him on stage.

"I married the right girl -- Kendel Ehrlich -- trust me," Bob Ehrlich said. "She loves politics, college football, and golf, you know, come on."

That night, former governor Ehrlich said his own political career was coming to a close. But what of his wife, a political enthusiast herself? Would she pick up the torch and run for a seat?

Those acquainted with her over the years -- as well as GOP leaders in the state and Anne Arundel County -- said she has all the qualities of an electable candidate. And some say they'd like to see her run.

But in a recent interview at her home in Annapolis, Kendel Ehrlich said public office isn't in the foreseeable future, although she did not completely dismiss the possibility.

"I'm certainly not discounting it sometime in my future, but I'm certainly really focused right now on what I'm doing -- being with the kids and the radio -- at this point in time," she said.

GOP leaders, coworkers, former employees and friends all say Ehrlich never actually told them of political aspirations, but they wouldn't be surprised if she made a run, either.

"If she decided to run someday, and I hope she would, she would be an amazing candidate," said Derek Fink, who was a press secretary for Kendel Ehrlich in her final years as Maryland's first lady.

"She's a strong leader. She's a very positive person. ... I can tell you she's genuine. She really does believe in the issues she takes on," said Fink, who was elected last month to the Anne Arundel County Council.

If Ehrlich does run for a seat, she'd already be accustomed to the political spotlight, which she was immediately introduced to 20 years ago when she started dating Bob Ehrlich, then a state legislator running for his second term.

"Once we began dating, she saw my life ... what members of (the) legislature do, and she wasn't real impressed. She liked to go to the ocean on weekends," he said.

Working as assistant public defender in Anne Arundel County at the time, Kendel Ehrlich's reservations about the political life were serious enough that she broke up with her future husband, who then persuaded her with a list of Top 10 reasons why she should reconsider a life in politics.

For as tentative about the political life as she initially was, Ehrlich became a fixture in her husband's campaigning from the time they were married 17 years ago, even planning a handful of fashion show fundraisers along the way.

Ehrlich said that campaigning has since become a family affair for the couple and their sons, Drew Robert, 11, and Joshua Taylor, 6. "It's something, at least from our perspective, that's fun to do together," she said.

"She never denied that she wanted to have a large role in her husband's administration," Siwinski Malone said.

Bob Ehrlich said his wife was not involved in policy discussions while he was governor, "but she had her first-lady priorities, and she was very high profile on drug and alcohol abuse and criminal justice and things that relate to her professional life," he said, referring to her past experience as a paralegal, public defender, prosecutor and legal counsel.

Ehrlich maintains her political voice on the WBAL radio show that she and her husband started together after he lost the 2006 election for governor. Bob Ehrlich said the station approached him about doing the show first and instead the couple proposed doing it together.

"When they first pitched the idea of doing the show together it was an intriguing idea because most politicians did shows by themselves," said Mark Miller, director of news and programming at WBAL.

But when Bob Ehrlich entered the governor's race this cycle, he was forced to leave the airwaves due to equal time laws, and the two-hour Saturday morning slot became The Kendel Ehrlich Show.

Some said continuing the show is evidence of her political aspirations, but she said it was just too much fun to give up.

"I love the forum because I love the interaction with the audience and the ability to talk with people directly and unfiltered. ... It's one of the more unfiltered mediums out there," she said.

She takes pride in being one of the few female radio show hosts at the station, as well as being the only female to serve on the board of directors at BankAnnapolis, a position she's held since 2007.

"I'm really proud of that, because I think there should be more women on boards making those kinds of decisions," she said.

Rick Lerner, chairman of the board at BankAnnapolis, said Ehrlich doesn't shy away as the only female, whether it is in the conference room or a company golf tournament.

"Kendel, as you've probably heard from others, is one of the boys. ... She holds her own to make sure her views are known at the board level," he said.

Lerner said he sought Ehrlich for the position, which oversees bank management and assists community relations, because he sensed her business instincts, and he knew she was well respected in the community.

Kendel Ehrlich on her future. (CNS Video by Shannon Hoffman and Abby Brownback)

"It takes her about five minutes to assess the facts of any particular situation and then cut to the heart of the matter and to offer advice to bank management," Lerner said.

Kendel Ehrlich would face some challenges if she chooses to enter politics. Though she's popular in Anne Arundel County, some say her unfiltered speech could be her greatest liability.

This was epitomized by a 2003 incident, when the first lady said at a domestic violence prevention rally that she'd shoot Britney Spears if she had the chance, later explaining she was making a point about the negative influences of pop culture on children.

Siwinski Malone, Ehrlich's press secretary at the time, said it was probably her only gaffe that generated national attention.

"She is a very opinionated woman ... Good or bad, that is her personality," Siwinski Malone said.

She described Kendel Ehrlich as "volatile."

Others who worked for the couple agreed that Kendel Ehrlich could be unpredictable at times. "Kendel, she's a unique personality. I think her main downfall is she shoots from the lips," said Joe Steffen, a longtime aide for Bob Ehrlich who said he became close friends with Kendel Ehrlich. He was excused as spokesman with the state insurance administration in 2005 for spreading rumors that then-Baltimore Mayor Martin O'Malley had an extramarital affair, and has since had no communication with the family.

While past employees for the couple use words like "opinionated" and "outspoken" to describe Kendel Ehrlich, her husband called it "a very strong personality," when explaining why he joked off-air at WBAL that the producer of The Kendel Ehrlich Show is the only guy who's not scared of his wife.

"She makes her opinions known, and anyway, when you have a strong personality you have some people that will have opinions of you, so I like to make fun of her about that," he said.

Steffen believes Kendel Ehrlich's personality could make her a force to be reckoned with. "She's really, really relentless," he said.

He also said he wouldn't be surprised if she ran for a seat. "I think she became a lot more ambitious, aggressive and she wants to be in a seat of acclaim" more than when he first met her in 1993.

Both Steffen and Siwinski Malone said that Kendel Ehrlich was vocal about the perks of being first lady and living in the governor's mansion.

But not everyone sees it that way.

"Kendel is just a very, very down-to-earth person," Miller said, describing her as the one who brings donuts and cake to share with co-workers at WBAL. "That's the normalcy of the type of person that she is. ... She's not very pretentious behind closed doors," he said.

Leaders of the Maryland Republican Party and Republican State Central Committee of Anne Arundel County, which help develop GOP candidates, said they have not approached Kendel Ehrlich about running for any office.

"That's not to say an approach wouldn't be made," said Ryan Mahoney, political director of the Maryland Republican Party.

"She is very well known. She's very active, whether it's in radio or being involved in grassroots activities from fundraising to attending Tea Party rallies. I think she would be a great candidate, depending on what she would want to run for," he said.

Though Bob Ehrlich said his wife isn't seriously considering a political career right now, he does think she's well-suited for a position in Anne Arundel County, where the couple resides with their two sons. He thinks she's qualified to run for judge, where the first-generation lawyer could employ her degree from the University of Baltimore Law School.

"If she wanted to look at county executive at some point in the future, I think she'd be qualified for that as well," he said.

But Kendel Ehrlich insists she's simply not thinking that far ahead.

"It's something that at least for right now, I don't envision. Would I do it down the road? That just depends on the opportunity, where I am in life, where I'm living in life. I have really learned not to plan my life in large scale what I'm going to be doing in years ahead, because it's always varied," she said.